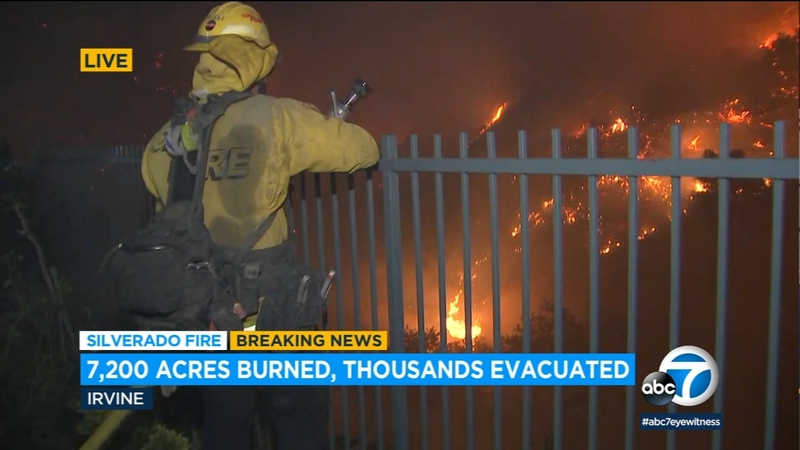 The fire was reported just after 6:45 a.m. Monday at 10 acres in size in the area of Santiago Canyon and Silverado Canyon roads, according to OCFA.

"Summary: SCE submits this report as it may involve an event that meets the subject of significant public attention or media coverage reporting requirement. Preliminary information reflects SCE overhead electrical facilities are located in the origin area of the Silverado Fire. We have no indication of any circuit activity prior to the report time of the fire, nor downed overhead primary conductors in the origin area. However, it appears that a lashing wire that was attached to an underbuilt telecommunication line may have contact SCE's overhead primary conductor which may have resulted in the ignition of the fire. The investigation is ongoing."
At least 500 fire personnel rapidly launched an aggressive fight against the flames as winds caused the blaze to move with a "moderate rate of spread," eventually jumping the 241 toll road and forcing people from their homes, officials said.

Amid red-flag conditions brought on by gusting winds and dangerously low humidity, a wildfire raced across terrain in the Santiago Canyon area near Irvine.

"This is a tough fire, we're experiencing winds, very high winds, very low humidity. Our firefighters are some of the bravest, if not the bravest in the world- this is a very hazardous job," Chief Fennessy added.

By 9 a.m., mandatory evacuations were ordered for residents in the Orchard Hills neighborhood. The established evacuation zone is for homes north of Irvine Boulevard from Bake Parkway to Jamboree Road.

Shortly before 2 p.m., additional evacuation orders were issued for homes south of Irvine Boulevard to Trabuco Road and from Jeffrey Road east to Portola High School.

"This fire is going to continue to cross and encroach upon the homes in multiple areas. So, our priority right now is getting people evacuated and out of the path of the fire," said Fennessy, who stressed that residents should immediately heed evacuation orders without delay.
A care and reception center has been set up at El Toro High School at 25255 Toledo Way for those in Lake Forest impacted by the mandatory evacuation order.

All schools in the Irvine Unified School District will be closed Tuesday due to the fire.

Tustin Unified will also be closing schools, including distance learning, on Tuesday out of an abundance of caution.

UC Irvine is shutting down campus operations on Tuesday as well.

There was no immediate word on the cause of the fire.