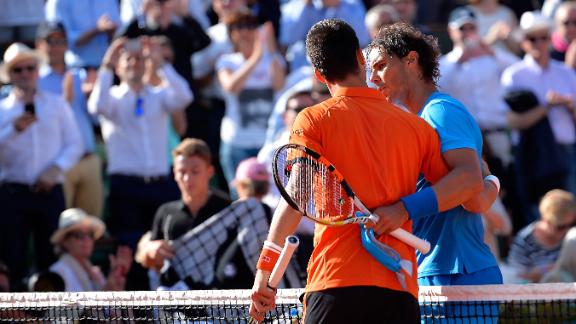 PARIS -- Nine-time French Open champion Rafael Nadal's loss in the quarterfinals dropped him three places to No. 10 in Monday's ATP rankings, his lowest spot since April 2005, while champion Stan Wawrinka rose from No. 9 to No. 4.

Novak Djokovic maintained a healthy lead at No. 1, despite losing to Wawrinka on Sunday in the final at Roland Garros. That prevented Djokovic, for now, from completing a career Grand Slam.

It was Djokovic who beat Nadal this year, ending the Spaniard's 39-match French Open winning streak.

No. 2 Roger Federer, No. 3 Andy Murray and No. 5 Kei Nishikori did not move in the rankings.

Lucie Safarova, the runner-up in Paris, moved from No. 13 to a career-best No. 7 after reaching her first Grand Slam final. Timea Bacsinszky, who pushed an ailing Williams to three sets in the semifinals, climbed nine spots to No. 15, her top ranking.

Maria Sharapova fell from No. 2 to No. 4 after losing to Safarova in the fourth round as the defending champion.

Petra Kvitova went up two places to No. 2, while Simona Halep remained at No. 3, and Caroline Wozniacki at No. 5.