KGO
By Amy Hollyfield
SAN FRANCISCO (KGO) -- A San Francisco State University graduate student is an Oscar winner for his work on the Pixar movie "Inside Out."

Jonas Rivera said going to San Francisco State was a big stepping stone in his career and Sunday night he made a giant leap.

"It's amazing and we are proud of him," another student said.

Rivera is a film producer for Pixar and took home the Oscar for Best Animated Picture for the film "Inside Out." "On this film, every single storyboard, every single frame, cut, line of dialog, every single pixel was done by the amazing artists we work with at Pixar led by the amazing by John Lasseter. They should be up here with us, we love them, along with our amazing cast, best cast ever," Rivera said.

"That's awesome, I think that's so great. My dad is one of those people who say, 'yeah, I'm telling you go SF State, they have a great cinema program,' and that's why I also came here because their cinema program is great, so that's crazy awesome," San Francisco State University Brittany Avale said.

"Knowing that like you can get a degree from here and do that, I think it is motivating," one student said.

Rivera spoke with ABC7 News last week about the film, calling it a simple idea about the struggles of growing up and how pleased he is that the film has gotten so much attention. "It feels amazing, I mean you don't really make these films with awards and things in mind. You make them one frame at a time over five years with a big crew. So, when you're done people like them, it's a big reward," Rivera said. 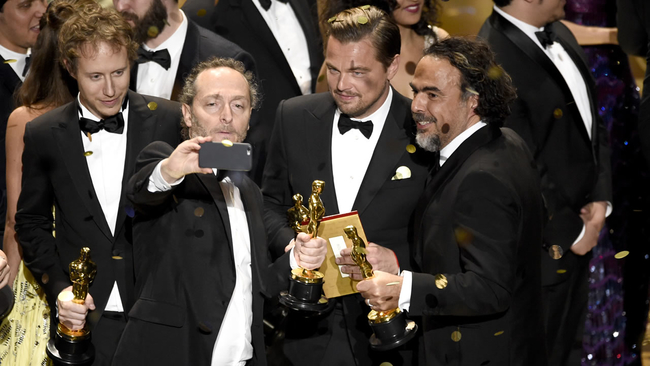