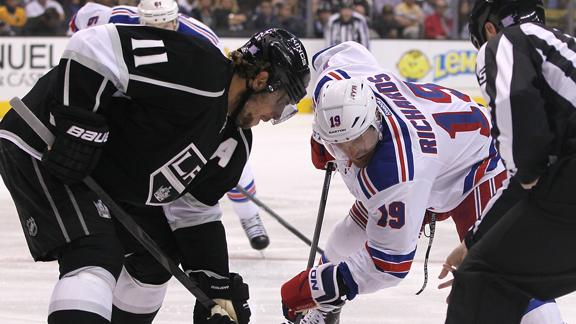 GREENBURGH, N.Y. -- The Los Angeles Kings may be the heavy favorites to capture the 2014 Stanley Cup championship, but New York Rangers coach Alain Vigneault is confident that his team can pull off the upset.

"Even though a lot of people aren't going to give us a chance, I like our chances," Vigneault said after Monday's practice at the Rangers' training facility. "I like our group. I like our focus. I like the way we compete.

"I know L.A.'s been there before. I know they've won before [in 2012]. I know they've gone to three Game 7s [this postseason] and won them, and they just beat the defending Stanley Cup champions [the Chicago Blackhawks]. I get that. ... But we've really rallied around ourselves and the opportunity [to play for the title]."

The Rangers have relished the underdog role throughout the playoffs.

"I think going into Philly [in the first round], people were probably 50-50 that we'd get through that," Vigneault said. "Going into Pittsburgh [in the Eastern Conference semifinals], I would probably say a lot more experts were picking Pittsburgh than the Rangers. And then against Montreal [in the conference finals], other than a few New York reporters, I think everybody across Canada was picking Montreal in four or five.

"So throughout these playoffs -- and it's not gonna change now -- we've been the underdog. But what we've done is focused on how we play and what we need to do on the ice. And that's definitely what we're going to do here on Wednesday."

The Kings have averaged a league-high 3.5 goals per game during the postseason.

The Rangers' chances of pulling off an upset likely hinge on goaltender Henrik Lundqvist being the best player in the series. Lundqvist has posted a 2.03 goals-against average and a .928 save percentage in the playoffs.