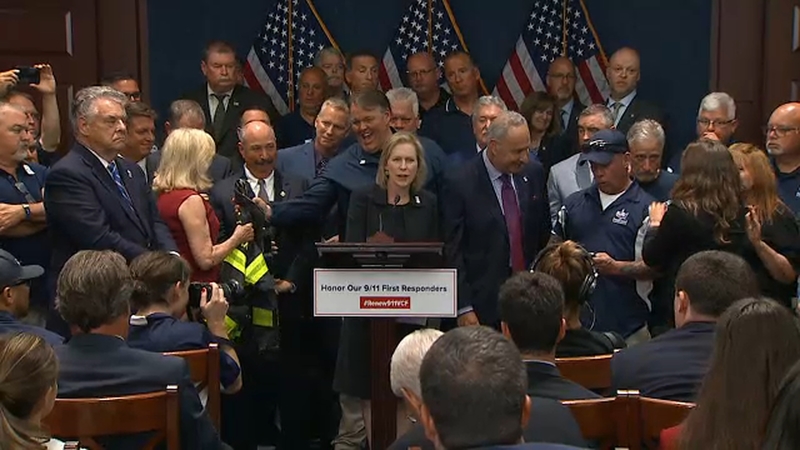 WASHINGTON, D.C. -- The Senate voted Tuesday in favor of a bipartisan bill to ensure a victims' compensation fund related to the September 11 attacks never runs out of money.

The announcement came after Democratic Sens. Kirsten Gillibrand and Chuck Schumer, both of New York, reached an agreement with Republican Sens. Mike Lee of Utah and Rand Paul of Kentucky to bring up the bill with two amendments sponsored by the GOP senators.

Those amendments both failed before the Senate voted on the full measure, approving it 97-2, with Lee and Paul voting no. The bill now goes to President Donald Trump.

Comedian Jon Stewart and scores of first responders looked on in the gallery overlooking the chamber as senators voted to approve the bill. As the last vote was cast, Stewart started a standing ovation, people standing and cheering all around the gallery.

Paul and Lee had been blocking a vote, with Paul saying he was concerned about its effect on the deficit while Lee wanted to ensure the fund had proper oversight in place to prevent fraud and abuse.

Gillibrand said 9/11 first responders and their families have had "enough of political games." The legislation had 74 Senate co-sponsors, including Gillibrand, and easily passed the House last week.

The bill extends though 2092 a fund created after the 2001 attacks, essentially making the fund permanent. The $7.4 billion fund is rapidly being depleted, and administrators recently cut benefit payments by up to 70%.

The Congressional Budget Office estimates the House-passed bill would result in about $10.2 billion in additional compensation payments over 10 years, including more than $4 billion for claims already filed.

As part of the deal, Democrats agreed to allow Lee and Paul to bring up amendments addressing their concerns. Gillibrand called the GOP amendments "needless and callous" and predicted they would be easily defeated.

"This vote is long overdue," she said at a news conference announcing the bipartisan deal. "No more excuses. We have to finish the job."

Stewart has been a major proponent of making the fund permanent. His celebrity shone a spotlight on the issue, and his testimony on Capitol Hill ripped lawmakers for failing to fully fund the program.

"They responded in five seconds," Stewart shouted at a hearing on June 11. "They did their jobs. With courage grace, tenacity, humility. Eighteen years later, do yours."

Even as Stewart worked toward an expeditious solution, some 9/11 victims were not able to see the fruits of his labor. NYPD Detective Luis Alvarez passed away from cancer just weeks before the bill was passed.

Alvarez had given his badge to Senate Majority Leader Mitch McConnell, a sign of the promise McConnell made to the ailing detective to bring the legislation to the Senate floor for a vote without any political jockeying over the budget.