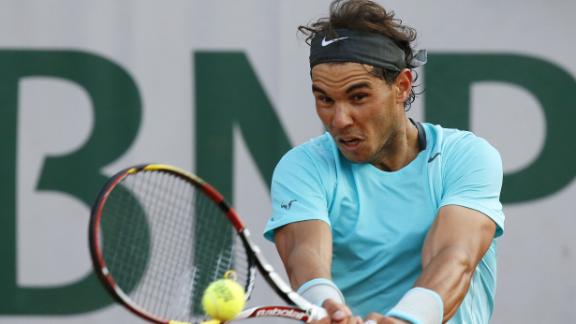 PARIS -- Briefly, and only briefly, Rafael Nadal was in a difficult spot in the French Open quarterfinals.

For the first time in this year's tournament, the eight-time champion dropped a set.

And this had to be on Nadal's mind: His opponent, David Ferrer, could present real problems. Not only is Ferrer ranked No. 5, and not only was he the runner-up at Roland Garros a year ago -- to Nadal, of course -- but he also beat Nadal on red clay the last time they played each other.

"At the beginning," Nadal acknowledged, "David was playing with a higher intensity than me."

But once Nadal made a key adjustment, deciding to dispense with backhands and hit forehands as much as possible, he took over. After committing 28 unforced errors across the first two sets, Nadal had zero in the third and only three in the last.

Ferrer, for his part, said that in the latter stages, "I lost my concentration, my focus."

It was Nadal's 33rd consecutive win at the French Open and improved his record in the event to 64-1.

The route Murray took during his 6-4, 6-1, 4-6, 1-6, 6-0 victory over No. 23 Gael Monfils of France was far more circuitous, finishing right on the cusp of dusk after 9:30 p.m. In front of a Court Philippe Chatrier crowd loudly pulling for Monfils, Murray was terrific at the outset and mediocre in the middle before closing on a high.

After a brief discussion with a tournament official over whether there was enough sun to play the fifth set -- there are no artificial lights on the Roland Garros courts -- Murray made the whole thing moot. He raced through that set in 24 minutes, winning 24 of 31 points, as Monfils appeared to stop trying.

Murray Advances To French Open Semis
Andy Murray came back after dropping two sets in a row to defeat Gael Monfils 6-4, 6-1, 4-6, 1-6, 6-0 and advance to the semifinals of the French Open.

Murray's Bizarre, 5-Set Win Over Monfils
Brad Gilbert and Patrick McEnroe break down Andy Murray's eventful and strange win over Gael Monfils to reach the semifinals of the French Open.

60-Second Slice: French Open Day 11
Prim Siripipat recaps a big Day 11 in Paris in just 60 seconds, including Taylor Townsend and Jo-Wilfried Tsonga's selfie, two routs in the women's quarterfinals, two serious battles on the men's side and a mini tantrum from Andy Murray.