8 injured after NYC passenger bus drives off overpass in the Bronx, is left hanging 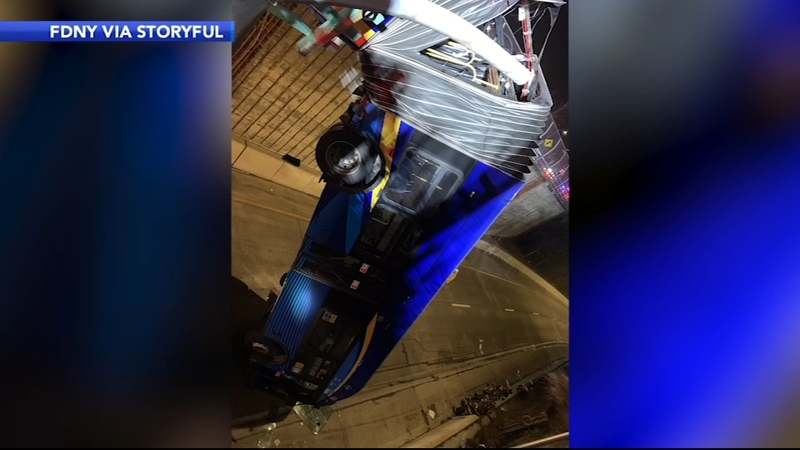 NEW YORK CITY -- Several people were injured after a passenger bus veered off the road and was left hanging off an overpass in New York City's Bronx.

The New York Police Department told WABC-TV that the incident happened at 11:10 p.m. Thursday on the Cross Bronx Expressway at University Avenue.

WABC confirmed at least eight people, including the bus driver, were injured in the accident. Most injuries were minor, though the driver suffered the most severe injuries and is in serious condition.

The New York City Fire Department tweeted Thursday night that there were nine total injuries, but in a statement they later said only eight people were treated for injuries.

"FDNY units are on scene of a motor vehicle accident at University Ave and the Cross Bronx Expressway in the Bronx where a tandem bus has crashed through the barriers and is hanging off the overpass onto the roadway below. There are nine civilian injuries reported at this time," the FDNY wrote on Twitter.

FDNY units are on scene of a motor vehicle accident at University Ave and the Cross Bronx Expressway in the Bronx where a tandem bus has crashed through the barriers and is hanging off the overpass onto the roadway below. There are nine civilian injuries reported at this time. pic.twitter.com/00YQ897hhs

"While responding to this incident, I began discussing the information we were receiving, picturing a bus hanging off the edge. We had two scenes here where #Rescue3 began securing the bus up-top while #Engine43 made their way around to begin treatment of the civilian patients. Currently we are making sure all the fuel and other hazardous materials within the vehicle is secured until the bus can be pulled onto the roadway," FDNY Acting Battalion Chief Steven Moore said in a statement later Friday morning.

Video from University Ave and the Cross Bronx Expressway where FDNY members continue to operate on scene for a tandem bus that crashed through a barrier onto a lower roadway. pic.twitter.com/Q0Y0vW7WmT

FDNY Deputy Chief Paul Hopper, who oversaw emergency medical treatment and transport at the scene, said: "We assessed and treated a total of eight patients from this accident. The bus fell approximately 50 feet onto the access road. The patients suffered injuries consistent with a fall from such a great height."

All those injured have been transported to an area hospital.

Authorities said the operator of the MTA Articulated Bus may have experienced some sort of brake failure or didn't properly navigate the turn.

The bus went over the rail to the ground below, where it had to be secured by the FDNY.

Photos shared on social media showed it dangling from the overpass.

In an audio recording from the FDNY obtained by ABC News, a dispatcher is heard saying, "Continue rescue. We have a tandem bus over the bridge, half of it is hanging off the bridge, there's people inside."

The intersection was shut down as d the bus was waiting to be towed.

After more than five hours, FDNY crews were able to lift it up and pull it back from the overpass just before 6:30 a.m. It has been towed to an MTA yard for further investigation.

No other vehicles were involved in the accident.