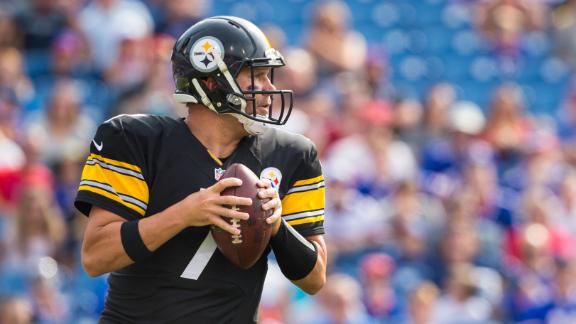 PITTSBURGH -- With the New England Patriots thin at receiver save forJulian Edelman, the Pittsburgh Steelers plan to make tight end Rob Gronkowski earn every yard -- and he'll have to shed constant contact to do it.

The Steelers plan to put their hands on Gronkowski at every chance while inside the 5-yard cushion that allows defensive contact on receiving routes.

Safety Mike Mitchell said Gronkowski is the best tight end in the world, but added, "He has success when people don't put their hands on him."

That's why a key matchup in the game is Gronkowski versus the Steelers' inside linebackers. Pro Bowler Lawrence Timmons has had success in man-to-man coverage, and second-year linebacker Ryan Shazier is a rangy defender in zone coverage.

The Steelers will likely mix and match both looks.

Gronkowski has 54 touchdowns in 65 regular-season NFL games -- an average of 0.83 touchdowns per game. The Patriots will be without receiver Brandon LaFell, so it's more incentive for the defense to target Gronkowski.

Told of the Steelers' comments, Gronkowski said Monday that "you have to be ready for anything."

"Some games I get jammed the whole game, some games I never get jammed. So when we go out there and practice, we practice everything -- getting jammed, not getting jammed, how to get off it, a little move. Whatever comes, I have to be ready, go out and perform," he said.

If the Steelers' defensive front can't get to Brady, all hope of disrupting Gronkowski might be futile. But the Steelers have separated the preseason's uneven defensive performances from this week, when all starters are ready to go.