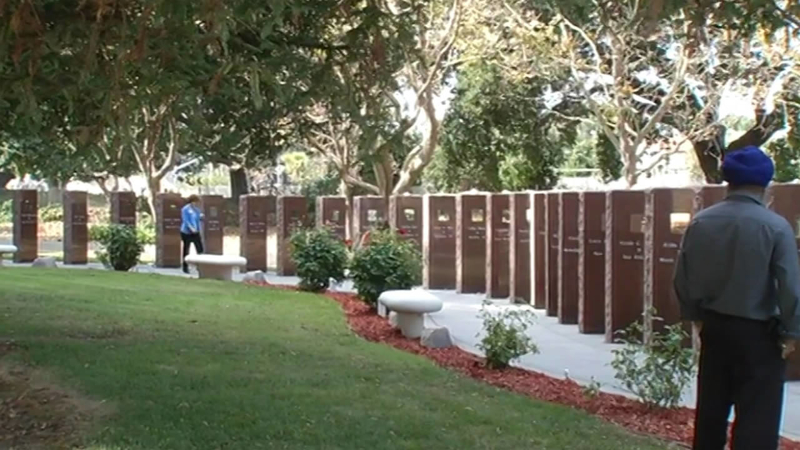 NEW YORK (KGO) -- Friday marks the 14th anniversary of the deadliest terrorist attack on American soil. Several events are taking place across the U.S. and in the Bay Area to remember what happened on September 11th, 2001.

Two ceremonies were held at the Flight 93 Memorial in Union City.

The 9/11 #Flight93 rose at the Union City memorial. pic.twitter.com/zQwu8O8cpR

The first took place Friday morning at 5:45 lead by the Navy recruiting district of San Francisco, who held a moment of silence at the time the planes hit the WTC Towers.

Military men and women then shared what they were doing on that day. For them, it's important to remember. "It truly hits home every single time I think about it. And really, you never want to forget about it," said U.S. Navy Chief Petty Officer Micaiah Vanroeke.

A few hours later, there was a bigger, public ceremony.

Ceremony for #Flight93 heroes at Union City memorial. Each of the 40 names were read out loud. pic.twitter.com/O2wMIeFaKs


The Union City Police Department explorers did an honorary Presentation of the Colors, the mayor gave her opening remarks and then the names of all 40 people on Flight 93 were read.

Many of those on the flight worked, lived or grew up in the Bay Area.

"Where do I go to honor and celebrate this day that we've set aside for our people? Union City is the only place. I'm really happy to be a part of the ceremony," said Sharon Caldwell, a United Airlines flight attendant.

The 9/11 Memorial was constructed in 2007 and a ceremony has been held here every year.

At the Flight 93 crash site in Shanksville, Pennsylvania, a new visitors center opened. It tells the story of the people on the United Airlines flight, including Mark Bingham, the Los Gatos man and Berkeley graduate known for his words "let's roll" before he and other passengers stormed the cockpit to stop the terrorists from reaching their intended target, possibly the U.S. Capitol building.

A man who was inside the capitol building on 9/11 credits the people on Flight 93 with saving his life. "He was one of the last people out of the building when he got the call that another plane was heading from Pennsylvania towards Washington," said Raz Hantman, Flight 93 memorial visitor.

In San Francisco, Mayor Ed Lee and Fire Chief Joanne Hayes-White will lead a ceremony to honor fallen first responders at fire station seven in the Mission district. Events will also take place at other stations across the city.

At the same time, San Mateo police will hold a ceremony at their headquarters on Franklin Parkway.

Volunteers will also gather at San Jose City Hall, before taking part in a day of service.

In Sacramento, a parade paid tribute to the victims and heroes of September 11th, along with three friends who disarmed a suspected terrorist aboard a train in Europe. Anthony Sadler, Spencer Stone, and Alex Skarlatos all sprang into action aboard an Amsterdam to Paris train last month. Today's parade begins at noon. It will end will a rally outside the state capitol.

The Red Cross is encouraging people to donate blood today. On the first anniversary of 9/11 in 2002, the Red Cross launched 9/11 Day to remember the victims. Since then, it has evolved into the largest annual day of blood donations in the U.S.

Today we remember the 9/11 attacks and the victims and their families. #NeverForget pic.twitter.com/2k2KfJ5Oox