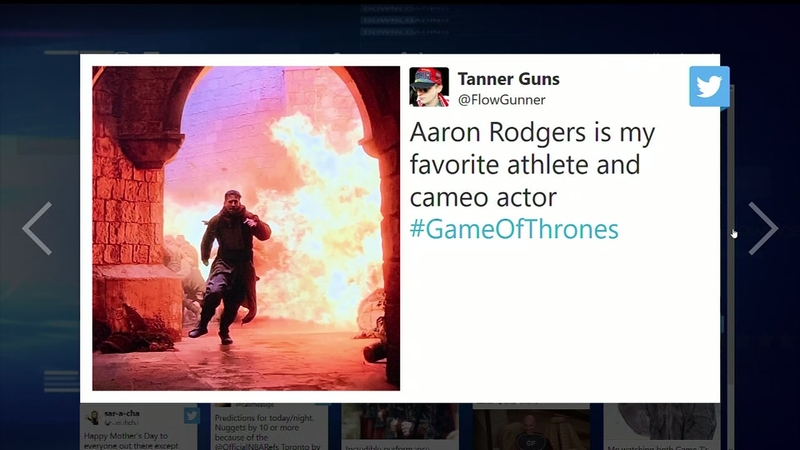 The penultimate episode of "Game of Thrones" featured many familiar faces from previous seasons and one from a very different part of television.

Green Bay Packers quarterback Aaron Rodgers made a very brief cameo, but fans are split whether it was before the battle at King's Landing or a man running during the battle.

The NFL star promoted the show as Lord Rodgers of Greenwater Bay before the season, but his role was a bit more minor.

Time for the Season 1 play by play with Lord @AaronRodgers12 of Greenwater Bay.

Your Binge #ForTheThrone continues with “The Pointy End,” “Baelor,” and “Fire and Blood.” https://t.co/crYx3Euc9u pic.twitter.com/L95Yy8X0q2

Fans say they can barely spot Rodgers star in a row of archers with the Golden company.

Other fans seemed to spot Rodgers again later in the episode, but his character went up in flames faster than Green Bay's Super Bowl chances last year.

He somehow completed this pass pic.twitter.com/nc702rpKLu

The few eagle-eyed fans that spotted Rodgers seemed to be Vikings fans with most of the jokes at his expense.

Cleganebowl is the closest Aaron Rodgers is getting to a bowl game this year. #GameofThrones pic.twitter.com/lG9yIaSZm6

Aaron Rodgers makes his appearance on Game of Thrones. Killed it. #gameofthrones #GOT pic.twitter.com/gbyP5ddScp

"Game of Thrones" has featured a few celebrities before. Most notable was Ed Sheeran appearing as a Lannister soldier in the first episode of season seven. Since the backlash from that cameo, the stars have appeared in much more subtle roles.