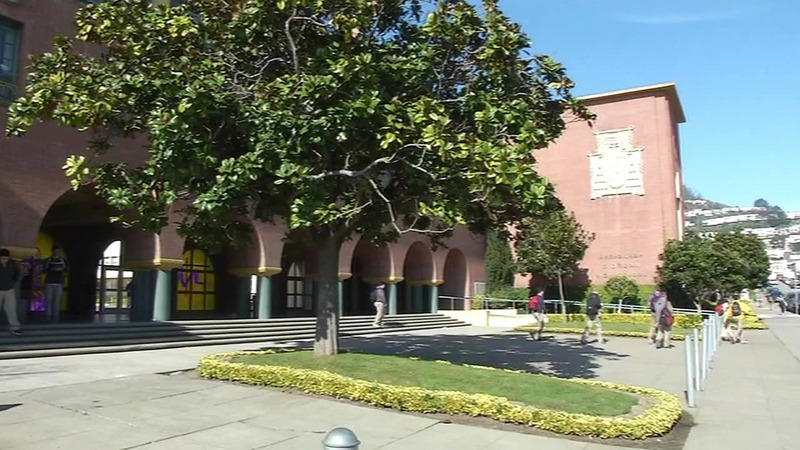 Over the last 18 months, at least five teachers have complained to the archdiocese about the principal showing pictures of naked women and other images not appropriate for a school environment. And some of those teachers tell Dan Noyes they have faced retaliation because they took a stand.

Vittorio Anastasio graduated from Riordan, coached the wrestling team for years, worked as guidance counselor and became principal in 2013. The I-Team spoke with several teachers now accusing the 48-year-old of conduct that is not proper for a school setting.

Noyes: "How does it come up?"
Teacher 2: "'Let me show you this. Look at this. What do you think about this one?' That's how it comes up. Casually, like it's no big deal."

Two of the teachers were especially concerned when the principal played a video of a 17-year-old Riordan High student. The teachers say the boy, in khaki pants and no shirt, appeared to be at a party lifting girls' skirts to reveal their naked bottoms and touching them in a sexual way.

Noyes: "When you show a video involving a student, that's a whole other matter, right?"
Teacher 2: "Oh, absolutely. Now, you're dealing with the laws, you know. Underage kids. That's a serious matter."

Teacher 3: "First, I was kind of taken aback and then obviously I thought it's not right, you know? We're a Catholic school. It wasn't the right thing to do."

Anastasio has hired attorney Harmeet Dhillon, a powerful figure in the state Republican Party. She emailed the I-Team, "The allegations against Mr. Anastasio are false and defamatory," and she threatened to sue the teachers.

A law firm responded for the teachers, "We certainly hope Mr. Anastasio is not using the threat of the legal process to silence his employees from pursuing their complaints or from talking to the press, which obviously would be further evidence of retaliation." The law firm's letter also reads. "Several of Mr. Anastasio's employees have lodged formal complaints with ARHS and the Archdiocese based on the allegations of inappropriate conduct and unlawful retaliation."

Two of the teachers who complained are out on stress leave.

Teacher 1: "I told him it was inappropriate and from that point on, he retaliated against me and that created a hostile and toxic working environment."

Dan: "What sorts of things have happened to the people who have complained?"
Teacher 2: "Letters, suspensions, lost days without pay. It's all over the school that we're the bad guys. They've just flipped the whole thing around that we've done something wrong."

The Archdiocese issued a media advisory in response to our reporting: "Last summer we thoroughly investigated a claim that, many months earlier, suggestive photographs of adults had allegedly been shared among faculty or staff. We determined that nothing inappropriate happened. To be certain this investigation was done properly, and covered all possible details, we retained an objective outside expert to review the investigation. Her conclusion was the same."

That "objective outside expert" is Rita Gleason, a retired Catholic high school principal who wrote a letter that she "admires Archbishop Riordan High School" and "has had the pleasure of working with some of the administrators." She concluded, "I found nothing illegal, immoral, or unfair."

But, the I-Team has learned that Gleason did not speak with any of the teachers who complained about the photographs or video. Gleason admits in a letter to faculty and staff that she performed her entire investigation by phone and e-mail from her home in Louisiana.

While he hasn't seen the video, Soffer added that a principal showing a sexually-suggestive video of an underage student could violate federal law.

"If it is sexually suggestive and is intended to generate a sexual reaction in the person watching, then it could be child pornography," Soffer said.

While the Archdiocese is holding meetings to figure out how to handle this crisis, all the major players are refusing to be interviewed. The I-Team asked:

They all declined. It is a major step for the teachers to speak out. They tell Noyes, they had to.

Teacher 2: "I've been brought up with integrity and I'm going to uphold that, even if it means my job. And I'm going to save this school because this could destroy our school and I don't want that to happen."