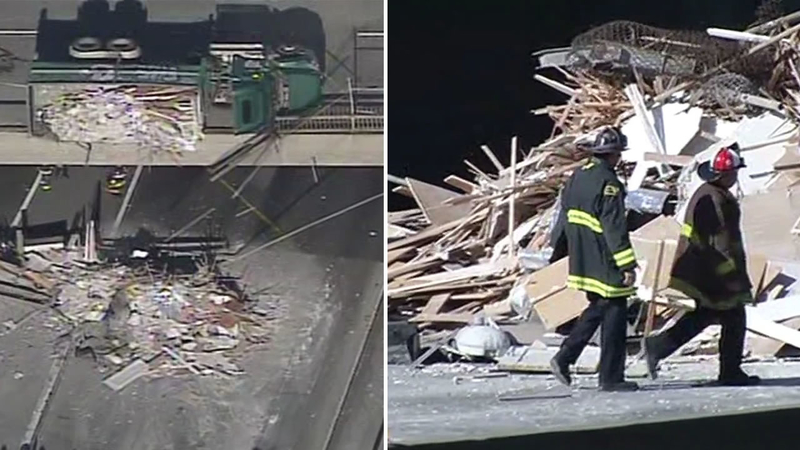 Lanes closed Tuesday morning when a truck overturned and spilled debris onto the entire roadway in the morning. Caltrans workers have been working all day to repair a fence on the Silver Avenue overpass and it was expected to reopen Tuesday night.

"He was pumping the brakes, and all you hear is air, and that was it and it was going too fast," said Johnny Padilla, San Francisco resident who lives on Silver Avenue.

That was the first sign this debris truck was in trouble. Witnesses 10 blocks away saw it speeding eastbound on Silver Avenue. It ultimately struck a light pole at the corner of Silver and San Bruno avenues. That impact caused the truck to roll on its side, trapping the driver in the cab, which dangled partially over the four southbound lanes of Highway 101.

Some of the construction debris spilled onto the freeway, but no one was hurt.

What surprises witnesses, including deli owner Charli Shihadih, is that no pedestrians, or cars were struck as the truck crossed the busy Silver and San Bruno Avenue intersection. A little bit earlier, and it would have been filled with school children.

"And that's their path over the ramp. That's where they walk to go to school,' Shihadih said. "Lucky, and the luckiest one is the driver."

Shihadih ran to the truck to help the driver, who was trapped inside the cab. The driver eventually had to smash out the windshield to escape. The truck did hit a car seconds earlier, injuring two people.

"It did crash into a vehicle. That vehicle subsequently crashed into a home on the corner of San Bruno and Somerset," said San Francisco police spokesperson Grace Gatapandan. "As the vehicle traveled further down eastbound, it did hit a light pole here, at San Bruno and Silver."

Sky7HD was overhead showing how the collision landed the car into the front of the home.

US 101 sb at Silver Ave o/c closed due to debris spill. Traffic on 101 diverted to 280 sb. pic.twitter.com/7KyzWHuAAF