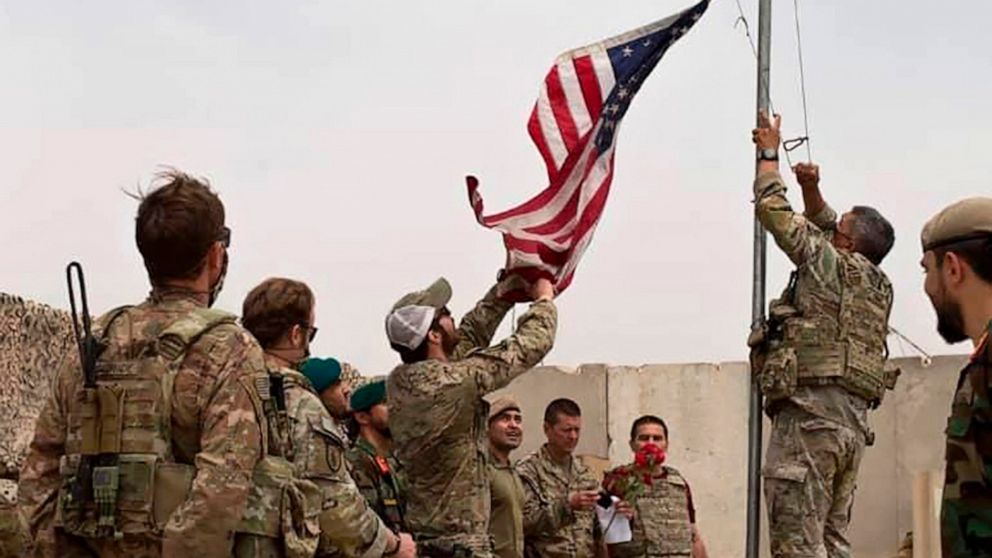 "Abdul" says he fears for his life, his wife's and his three children's, but that is exactly why he is speaking out.

"I am fighting for my family and for others who are left behind," said the Afghan interpreter, who worked for years with U.S. troops in some of the country's most dangerous territory.

Abdul, whose real name ABC News is not using to protect him and his family, is just one of approximately 18,000 Afghans who worked for the U.S. military and diplomatic missions in Afghanistan and are now seeking a U.S. visa.

As President Joe Biden pulls out the last U.S. forces here, those translators, guides and other contractors who were promised U.S. visas for their service are left wondering if they and their families will survive an American withdrawal.

While the Taliban have yet to meet its commitments under that deal, like deny safe haven to terror groups or negotiate toward a permanent ceasefire, Biden still ordered troops out, nearly 20 years after Taliban support for the al Qaeda terrorists responsible for the Sept. 11th attacks brought American forces to the country in the first place.

The Biden administration has repeatedly said it is considering all options to help Afghans like Abdul, but as that withdrawal accelerates, there is a growing chorus of U.S. lawmakers in both parties who say the current visa program is not enough.

Since 2006, Congress has made available a set number of special immigrant visas, or SIVs, for Afghan and Iraqi translators or for contractors who face an "ongoing serious threat as a consequence of such employment," as well as their immediate family members.

But the application process, which by law should take nine months, on average takes four years, with many applicants waiting far longer.

In the last year, those delays were further exacerbated by the COVID-19 pandemic. For much of 2020, in-person interviews at the U.S. embassy in Kabul, a key part of the visa process, were canceled, and again on June 13, the embassy shut its doors because of a devastating COVID outbreak in its community.

"It will take many years, like two years, five years, seven years," said Abdul, who worked as an interpreter with the U.S. Marines in Helmand province.

He added that he and his brother, a U.S. contractor for a decade, are both essentially in hiding after receiving threatening phone calls and letters from Taliban militants: "If they take over Kabul, they will come and behead us all. They will kill us," he told ABC News Tuesday.

Secretary of State Antony Blinken said this week that the administration hasn't "ruled anything out," including a possible evacuation of Afghans to a third country or U.S. territory like Guam to have their applications processed from there.

But he suggested that despite its yearslong backlogs, the administration is focused on making the Special Immigrant Visa program work better instead.

"We continue to look at every possible contingency to make sure that one way or another we can accommodate the demand. We haven't ruled anything out, and right now we're focused on making sure that we actually can make good on the folks who are in the system," Blinken said Monday.

In the face of pressure from Democratic and Republican lawmakers, he conceded, "We've got challenges," but he defended his department by saying it has "surged" resources to deal with the backlogs, including by adding 50 staffers in Washington. Earlier this month, he told Congress he expects they will clear the backlog "over the next few months, at about the pace of 1,000 a month."

In the face of the warnings in Washington, the Taliban itself has said Afghans who worked with the U.S. have nothing to fear, even as the militants have taken control of dozens of districts since Biden's withdrawal announcement.

"When they abandon enemy ranks and opt to live as ordinary Afghans in their homeland, they will not face any issues," the group said in a statement on June 7.

Sayed Akbar Agha, a senior leader when the Taliban ruled prior to the U.S. invasion in 2001, echoed that, saying Tuesday, "Some of those people who are claiming they will be harmed, they are maybe just wanting to get out of here or get somewhere else, that is why they are saying that, but the Taliban will not harm them."

That hasn't been the case for years, however. At least 300 Afghans who worked for the U.S. have been killed in targeted assassinations since 2014, according to No One Left Behind, an advocacy organization dedicated to assisting SIV applicants.

That's particularly true for interpreters, according to "Suhail," who worked with U.S. special forces as one and whose real name ABC News is also concealing.

"The interpreters, the linguists, you know, were the eyes, the ears, everything of the Americans. They were the bridge, you know? So, if (the Taliban) take over Kabul, and they show up, they catch anybody, any linguist, they're gonna kill them," he said Monday.