KGO
By by Mike Cerre 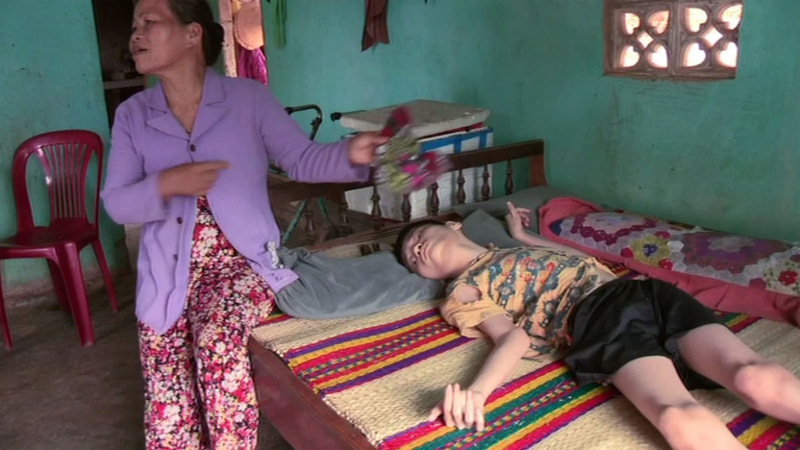 President Obama will make his first visit to the country next week. While meeting with Vietnam's president, they'll discuss human rights, an arms embargo and cleaning up sites contaminated with Agent Orange, the chemical used by American troops to clear jungles.

Most tourists arriving at the new Danang International Airport don't know it's been one of Vietnam's most contaminated Agent Orange sites, with dioxin levels in some areas 350 times international safety standards.

"Nor did I, when I was based here in the 1970s as a marine aviator," said Larry Vetter, a Vietnam veteran.

"The Agent Orange defoliant used during the war and stored in Danang and other airbases, leaked into the surrounding areas and is believed to have contaminated local water sources, according to Canadian researchers," he said.

Vetter, also a former Marine based in Danang during the war moved to Vietnam four years ago after recovering from prostate cancer, one of the presumed Agent Orange-related illnesses, which nearly 700,000 American vets are being compensated for.

Toan, the oldest one, is currently in intensive care now unable to swallow on his own.

"By the age of 8, he was seriously showing symptoms, stumbling, not having the strength to pull himself up. They saw some American doctors. The American doctors told them that it was likely a disease caused by Agent Orange.

Because the Agent Orange dioxins contaminated the local water table and nearby fishing ponds around the airport, the health effects have skipped generations and are suspected to be the cause of abnormally high rates of muscular and neurological problems for a new generation of Vietnamese in the area.

The family Vetter is helping spends most of their day camped outside of the hospital since they are responsible for feeding and bathing their sick relatives.

Their mother, Hoa, works very hard trying to hold the family together. Her husband is paraplegic and two boys quadriplegic.

Senator Patrick Leahy was able to enlist rare, bipartisan support to fund the first and only U.S. effort to clean-up an Agent Orange site.

At the former Danang Air Base, a three-story oven was built to literally bake the contaminated soil at 600 degrees for six months to cook off the dangerous dioxins before returning it to the site.

"Here, we have both a moral and humanitarian reason to be involved. And it's in our long-term best interests to bring stability to Vietnam," said Leahy.

The United States has completed the first phase of the clean-up at the Danang Air Base at the cost of nearly $100 million. Now the Vietnamese government wants the U.S. to clean-up another base near Saigon, Bien Hoa, which is five times as large and could cost a half a billion dollars.

"I also feel a little bit of national guilt for what we did here in Vietnam to so many people. I need to in my own little way try to help," said Vetter.

While the two governments negotiate this week in Hanoi on the next steps for remediating this dangerous legacy, one American veteran is back in the trenches in Vietnam working with the continuing casualties of the war.