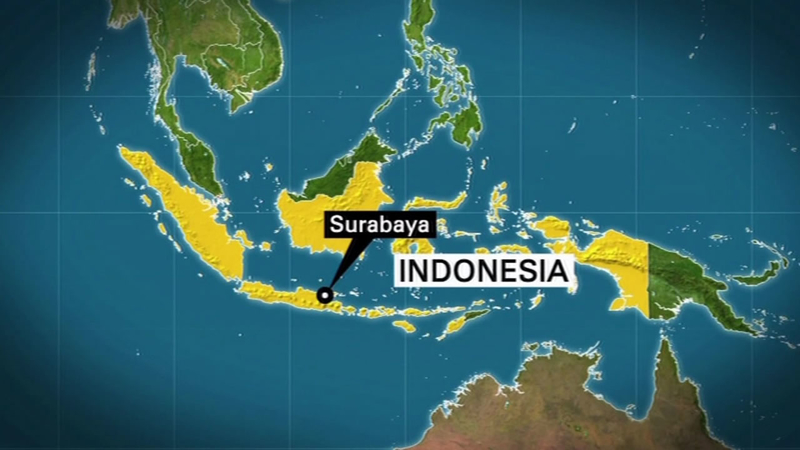 SURABAYA, Indonesia (KGO) -- An official with Indonesia's search and rescue agency says an air search for the missing AirAsia jet with 162 people on board has been suspended due to nightfall and will resume Monday morning.

Achmad Toha says the planes involved in search returned to their base Sunday evening, but that some ships were still in the area where the plane lost contact with air traffic control. The air search was set to resume at 6 a.m. Monday.

The Airbus A320 was bound for Singapore from Indonesia's second-largest city, Surabaya. A massive sea search was launched near Belitung island in the Java Sea over which the jetliner lost contact with ground traffic control, about 42 minutes after taking off.

The jet lost contact with ground control on Sunday after takeoff from Indonesia on the way to Singapore.

The Singapore Civil Aviation Authority says the plane lost communication with Jakarta's air traffic control at 7:24 a.m., local time about an hour before it was scheduled to land in Singapore. The contact was lost about 42 minutes after takeoff from Indonesia's Surabaya airport.

AirAsia Indonesia regrets to confirm that QZ8501 from Surabaya to Singapore has lost contact at 07:24hrs this morning http://t.co/WomRQuzcPO

AirAsia reported the plane had 155 passengers, 7 crew on board.

An official with the Transport Ministry tells local media that the plane had asked for an "unusual route" to avoid weather before it lost contact.

He says the weather in the area was cloudy.

Most of the passengers are from Indonesia. The rest were from Malaysia, Singapore, South Korea and France.

Singaporian authorities have launched a search for the plane in the Java Sea.

Crews from the Singaporean Air Force and Navy are assisting in that search.

Local broadcasters have been passing along details about where family of those aboard should get information.

According to Civil Aviation authorities, a waiting area has already been set up at Changi Airport in Singapore.

AirAsia is a budget airline based out of Malaysia. That country has been reeling from two high-profile crashes this year.

According to the latest statement by the airline, the captain and first officer were both experienced pilots with thousands of hours of flight time.

The single-aisle Airbus A320 had just undergone routine maintenance in November.