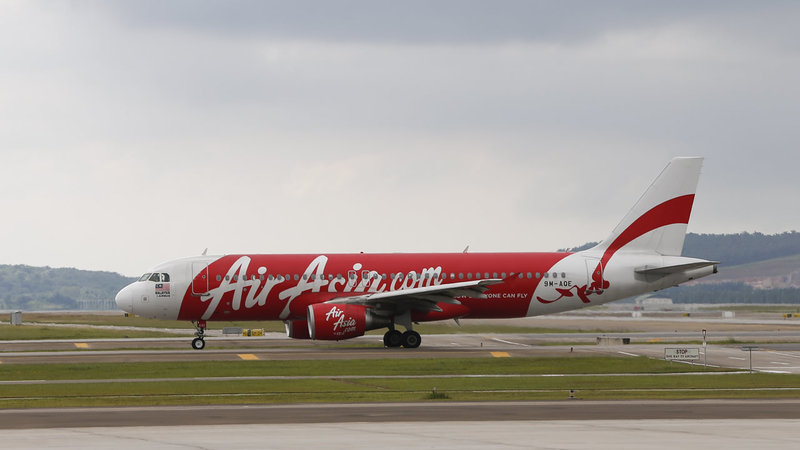 SURABAYA, Indonesia -- Searchers "currently suspect" that the AirAsia jetliner that disappeared Sunday morning over the Java Sea is on the bottom of the ocean, the head of the lead agency in the operation said.

"We currently suspect that plane is located on the ocean floor," Bambang Soelistyo, the head of Indonesia's National Search and Rescue Agency said.

If the plane is found on the ocean floor, there would be a challenge in getting the plane to the surface because they do not have the "submersible" equipment, Soelistyo said.

The plane's Emergency Locator Transmitter should function automatically and send warning signals, but no signal has been detected by control centers in Indonesia or in neighboring countries, Soelistyo said.

The AirAsia jet lost contact with air traffic control over the Java Sea during a flight to Singapore Sunday morning, shortly after the pilots requested a change of flight plan because of weather.

The Orion took off from Darwin Monday morning local time to join the search operations.

Ships engaged in the search and rescue effort reached the area where the plane was believed to be lost around Belitung Island at approximately 6:49 a.m., a spokeswoman for the Indonesian National Search and Rescue Agency said.

The flight, which had at least 161 people on board, was scheduled to land in Singapore at 7:57 a.m. local time.

"We are deeply shocked and saddened by this incident," said Sunu Widyatmoko, CEO of AirAsia Indonesia. "We are cooperating with the relevant authorities to the fullest extent to determine the cause of this incident. In the meantime, our main priority is keeping the families of our passengers and colleagues informed on the latest developments."

Widyatmoko said the airline had mobilized a support team to help families of the passengers.

The flight was piloted by Captain Iriyanto, who had a total of 20,537 flying hours, according to a statement from AirAsia. More than 6,000 of Iriyanto's flying hours were on an Airbus A320.

The first officer, Remi Emmanuel Plesel, had 2,275 flying hours with AirAsia Indonesia, according to the airline.

ABC News consultant Col. Stephen Ganyard said weather may have played a role in whatever happened to the plane but several questions remained.

"We're looking for clues and at this point there are very few clues," he said.

The six-year-old aircraft was on its submitted flight plan but the pilot requested a deviation because of en-route weather before communication with the aircraft was lost, AirAsia said.

Murjatmodjo said the pilot also requested to increase altitude to 38,000 feet from 32,000 feet to "avoid clouds." Thunderstorms were reported in the area with clouds up to 50,000 feet.

While ground control in Jakarta approved the pilot's request to divert the flight, the request to raise elevation hadn't been approved before losing contact with the plane, said Murjatmodjo.

The plane had been in the air for about 41 minutes when contact was lost.

The jet was flying at the regular cruising altitude for most jetliners - 32,000 feet - when the signal was lost, according to flight tracking website Flightradar24. No distress reports came from the plane, officials said.

The aircraft had undergone its last scheduled maintenance on November 16, 2014.

The flight manifest for the jet showed there were 155 passengers on board plus seven crew members, although the Indonesian transport ministry only reported six crew members.

Of the passengers, 149 were Indonesians, three were South Korean, and there was one traveler each from Malaysia, Singapore and the United Kingdom, according to AirAsia.

AirAsia said the crew members consisted of six Indonesians and one person from France.

The Civil Aviation Authority of Singapore said it was informed about the missing plane by Jakarta ground control about half an hour after contact was lost.

The Singapore air force and the navy were activated with two C-130 ready to assist Indonesia authorities in the search, according to the aviation authority.

"We remain ready to provide any assistance to support the search and rescue effort," the CAAS said.

A waiting area was set up at Changi Airport in Singapore, where the plane had been scheduled to land, with facilities and support for relatives and friends of the passengers on the plane. At Juanda International Airport in Surabaya, dozens of relatives sat in a room, many of them talking on mobile phones and crying. Some looked dazed, the Associated Press reported.

The White House said President Obama was briefed on the flight. A State Department spokesperson said the U.S. is "ready to assist in any way that's helpful."

This is the third air incident this year for Malaysian-based airlines.

In July, another Malaysia Airlines jet was shot down over Ukraine, killing all 298 on board.

In March, Malaysia Airlines flight 370, a wide-bodied Boeing 777 with 239 people on board, lost contact with air traffic control soon after taking off from Kuala Lumpur for Beijing. It hasn't been found.

Ganyard lamented the disappearance of another aircraft this year.

"It's really disheartening," said Ganyard. "It just shouldn't happen in this day and age."