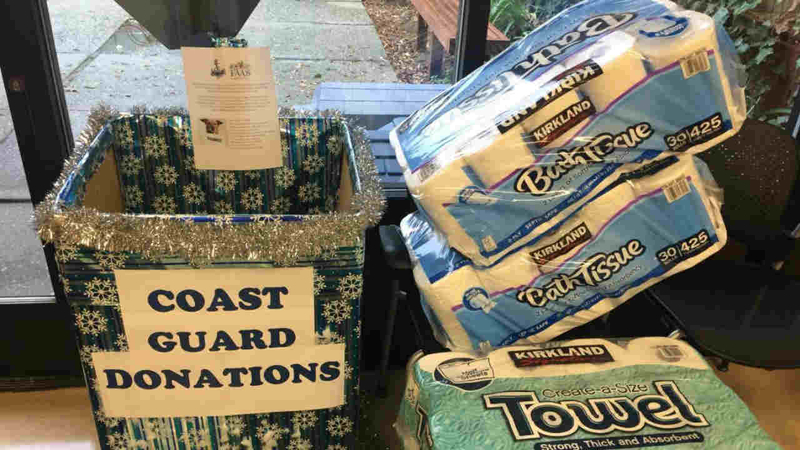 ALAMEDA, Calif. (KGO) -- The Local Cafe in Alameda is one of several Alameda businesses collecting supplies for Coast Guard families impacted by the government shutdown. The Coast Guard is an integral part of the Alameda community.
"Many of these families haven't received a paycheck. They've got lots of bills to pay and they have to feed their families," said Otto Wright who is the owner of The Local.

Jody Bhalla dropped off a bag of food and gift cards.

"I thought, I'm an Alameda resident I've been here for 15 years we have to take care of our own and I really appreciate and thank the families that put themselves out there everyday and I wanted to help," said Bhalla.

The Friends of the Alameda Animal Shelter is also collecting donations.

"Every year over 1,000 animals come through here and we save 99 percent of them and the reason we do that is because the community is so supportive. That includes the Coast Guard families - they're adopters, they're volunteers, they're donors, they're really part of our family as well," said Executive Director John Lipp.

Nicole Lauer and Danielle Manor of the East Bay Coast Guard Spouses Club came by Tuesday afternoon to pick up what's been collected so far.

"As a parent we have to say well our kids need to be fed we need to be fed so we really had to prioritize and juggle what's okay being pushed off if he doesn't get paid on the 15th and what absolutely needs to be paid," said Lauer.
"Luckily I do work at the YMCA so I do still have my paycheck but it's just not enough to feed a family of five, plus pay our bills so it is very stressful," said Manor.

RELATED: US food stamp program could run out of funding if shutdown continues

Lauer, Manor and Manor's children have been picking up the items from collection sites and bringing them to the armed services YMCA.

We’ll show you how you can help local Coast Guard families impacted by government shutdown at 4 & 6pm on @abc7newsbayarea pic.twitter.com/ASe6byFn5U

"It brings a tear to my eye because I can not get over how much people in our community want to help us and that we know now they are there for us," said Manor.

As of right now there are four collection sites around Alameda: The Local, Alameda Island Brewing Company, Rockwall Wine Company and Friends of the Alameda Animal Shelter. You can also make an appointment to drop your items off at the armed services YMCA by emailing East Bay Spouses.