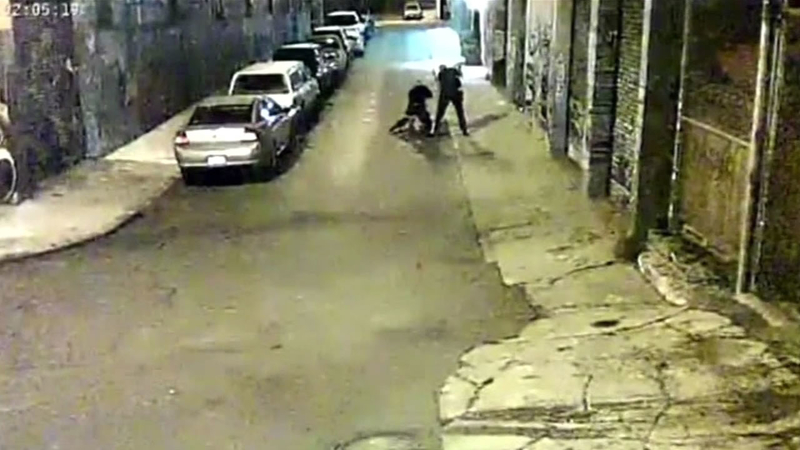 SAN FRANCISCO (KGO) -- The San Francisco District Attorney and police are now investigating the two Alameda County deputies shown in a video repeatedly beating a man with their batons.

Since ABC7 News broke the story Friday, the fallout has been quick.

That may not be the only video we'll be seeing because Alameda County sheriff's deputies are required to wear body cams, presumably they were turned on in part of the sheriff's investigation.

Two deputies struck Stanislav Patrov, an auto theft suspect, repeatedly with their batons after chasing him and tackling him in this alley in San Francisco's Mission District.

They had chased him from San Leandro to San Francisco after he reportedly stole a car and rammed a sheriff's vehicle.

The baton blows happened after the man appeared to slow down when an officer yelled for him to stop.

Police and other deputy sheriffs finally arrived and that's when the two stopped striking Petrov.

Petrov's mother Olga saw her son on Sunday at San Francisco General Hospital. She told us her 29-year-old son has had mental and physical ailments since birth.

She was overcome with shock and disbelief when she saw the video.

"What kind of words you can put together, what kind of eloquence you're supposed to have to define this, to justify the joy to beat somebody who's on the ground?" she asked.

"His arms, from his elbows down to his hands, were bandaged, appeared to be in soft casts. They were swollen like he had bones broken in both of his arms," Woods said.

Woods wants the state attorney general and the U.S. attorney to investigate.