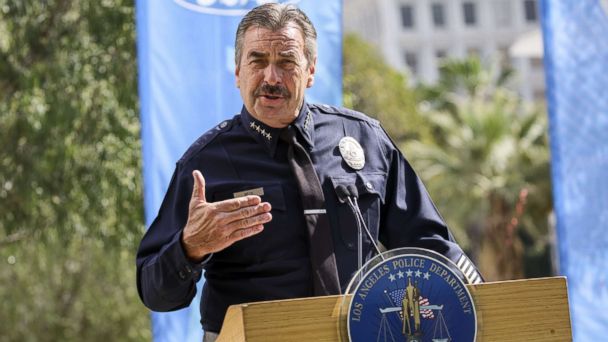 The aunt of a woman who died in police custody was arrested Tuesday after throwing an ash-like substance at the chief of the Los Angeles Police Department and claiming the substance was the remains of her dead niece.

Sheila Brim, whose niece Wakiesha Wilson died in a police cell in 2016, walked towards the front of a meeting of the Los Angeles Board of Police Commissioners and threw the powdery substance at Chief Charlie Beck.

According to a video released by the commissioners, Brim could be heard shouting, "That's Wakiesha! She's gonna stay with you!"

The unknown substance has not been officially identified yet, but a Los Angeles Fire Department hazmat team determined the material was non-hazardous, according to an official statement released by LAPD.

Wilson died in police custody in 2016 after she was found unconscious in her jail cell. Police say she died by suicide while her family adamantly disputes the claim, asserting instead she died after a physical confrontation with a police officer.

Wilson's controversial death caused an uproar in the African American community nationwide and became a symbol for the Black Lives Matter movement.

As Brim was being escorted from the meeting, Melina Abdullah, one of the co-founders of Black Lives Matter, Los Angeles, allegedly got into a physical altercation with a police officer.

Both women were charged with battery on a police officer according to the Los Angeles Police Department. They were released Tuesday night, Brim on $20,000 bail and Abdullah on her own recognizance.

Abdullah told ABC News she arrived the meeting late and only approached the front to ensure Brim was not being mistreated by police officers.

She claimed she didn't see what happened to cause the commotion, but in the midst of chaos she "touched the police officer's arm" which led to her arrest.

"All I heard was, 'Put your hand in the back,'" Abdullah told ABC News.

When asked about the material Brim used, Abdullah said she didn't ask Brim about it, her primary concern was looking after Brim since they were booked at the same facility where Wilson died.

"I was concerned about how traumatic it must have been for her, she was essentially a second mom to Wakiesha, she helped raise her, for her to be in the same facility her niece was killed must be highly upsetting," Abdullah said.

ABC News has also reached out to Brim but she refused to comment.

Soon after the incident, Beck received medical attention but did not require any treatment, an LAPD spokesperson told ABC News.

"Today's assault was not only disrespectful to the Office of the Chief of Police, but more importantly to a process of community engagement that has been recognized across the nation," Beck said.

The women's behavior in a forum that was meant for productive public discussions "created chaos and fear for any Angelenos who wanted to voice their opinion about policing in our city," he added.

Abdullah rejected the chief's complaint, saying the focus should be on victims' families.