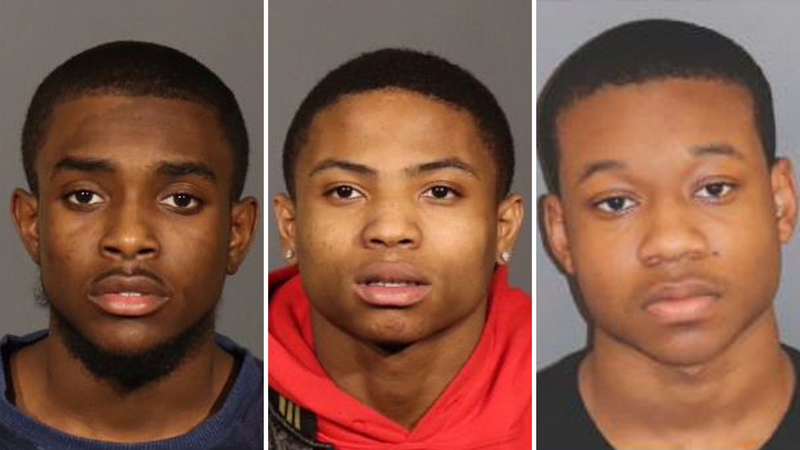 BROOKLYN, New York City -- Authorities in New York City announced on Tuesday that 21 alleged gang members have been charged in connection with two murders, three non-fatal shootings, and two acts of reckless endangerment involving the shooting of a firearm as well as a gunpoint robbery and other violence.

Brooklyn District Attorney Eric Gonzalez and NYPD Commissioner James O'Neill held a press conference detailing the allegations, saying one of the murders involved a father and his two sons -- who are now co-defendants -- with evidence of the father coaching his sons on how to avoid arrest.

The suspects were identified as:

"These defendants terrorized the streets of Brooklyn by opening fire on perceived rivals and recklessly firing their guns, including in broad daylight, endangering innocent bystanders," Gonzalez said. "In one instance, an innocent 15-year-old boy was killed when he was mistaken for a rival gang member."

They face various penalties, depending on their age and the charges, ranging from probation to 25 years to life in prison.


"This group posed a significant threat to the members of our community and were known to be involved in serious criminal activity including attempted murder, illegal guns and robberies," O'Neill said. "The outcome of this investigation is testament to the dedicated investigators of our department and its law enforcement partners."

According to the indictment, over the course of the conspiracy, which ran from July 21, 2016 to June 27, 2019, the defendants variously allegedly agreed to commit crimes, including murder, assault, weapons possession and various other crimes to establish and maintain their dominance, according to the indictment, and feuded with rival gangs from East Flatbush and Flatbush, as well as Canarsie.

Furthermore, it is alleged that it was part of the conspiracies for gang members to engage in armed attacks against rival gang members, running reconnaissance missions in vehicles, and shooting individuals they suspected of being rival gang members, especially in Canarsie, an act commonly referred to by the defendants as "spinning the Floss."

On at least two occasions, these armed hunting expeditions resulted in death.

Among the acts of violence charged in the indictment are the following:

--On December 27, 2016, on Utica Avenue, in the Brownsville section of Brooklyn, defendant Khaysean Porter, acting in concert with others, allegedly shot and injured an alleged rival gang member.

--On December 28, 2016, in the vicinity of President Street and Utica Avenue, in Crown Heights, defendant Travis Laroc, acting in concert with others, allegedly shot and injured a rival gang member.

--On February 5, 2017, it is alleged, defendant Khaysean Porter, 21, acting in concert with Travis Laroc, Tahir Thomas and others, shot and killed Darren Harrison, 22, an alleged rival and injured a second alleged rival in the vicinity of East 84th Street in Canarsie.

--On February 20, 2017, it is alleged, defendant Zidon Clarke acting in concert with others, shot and killed Rohan Levy, an innocent 15-year-old, who he mistakenly believed was a rival. A second person was shot and injured in that incident, which occurred on East 55th Street in the vicinity of East Flatbush.

--On February 24, 2017, Walter Porter and his sons, Khaysean Porter and Keemari Porter, were in a vehicle that was stopped by police in the vicinity of Pennsylvania Avenue, in East New York. Police recovered dismantled pieces of two separate pistols inside the vehicle, a .40 caliber pistol and a .38 caliber pistol that were used in the four shootings detailed above.
Report a correction or typo
Related topics:
new yorkarrestmurdergang violenceshootingu.s. & worldgang
Copyright © 2021 WABC-TV. All Rights Reserved.
More Videos
From CNN Newsource affiliates
TOP STORIES