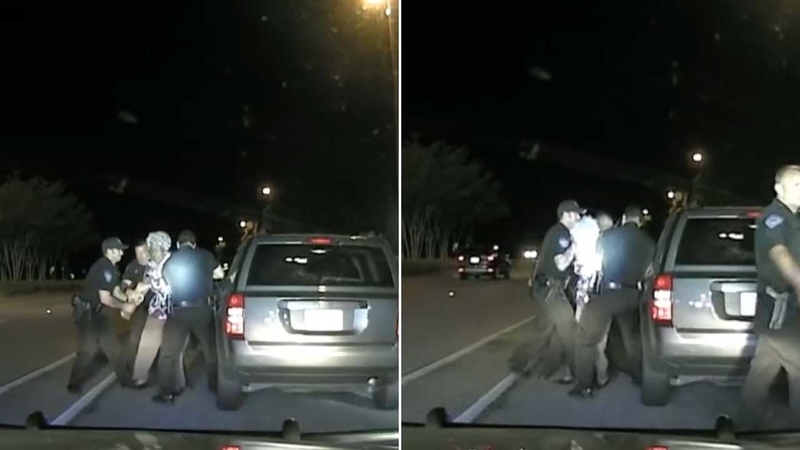 ALPHARETTA, Georgia -- Police in Alpharetta, Georgia have opened an internal investigation after officers dragged a 65-year-old grandmother from her car during a traffic stop. One officer, who screamed a profanity at her, has now resigned.

After she was pulled over, the nearly 15-minute interaction continued to escalate. As Campbell is being dragged from the car, an officer can be heard screaming, "You're not in charge! Shut the [expletive] up and get out of the car!"

Campbell asked the officer his name, and then he can be seen grabbing her. Campbell screamed.

The police department shared the full dashcam video of the May 4 incident with an introduction from Public Safety Chief John Robison.

"There are aspects of this video that you're likely about to watch that simply do not represent who we are as an organization," Robison said. "Once a detailed investigation is completed, I can assure that there will be a decisive and appropriate outcome."

The situation began, police said, when Campbell swerved into the officer's lane while turning, nearly causing a collision. An officer pulled her over and attempted to issue a citation for failure to maintain lane.

Campbell refused to sign the ticket because she believed it would be an admission of guilt. The officer told her she would be arrested if she didn't. The department explained on its YouTube page that this is Georgia law, adding that "a courtroom is the time and place to dispute the officer's decision."

In the video, Campbell then asks to speak to a supervisor. A supervisor was notified at that point, police said. The officer continued to ask Campbell to exit the vehicle and eventually called for backup.

"The officers who were responding clearly were not aware of what they were responding to," department spokesman Howard Miller told WSB. "The first officer that arrived to assist noticed that the driver they were dealing with was an older lady and didn't appear to be threatening the officers when they arrived."

Campbell agreed to get out of the vehicle. That's when one of the officers, James Legg, began screaming at her and then grabbed her.

"Am I in a movie? Is this a movie? I couldn't believe it. It was surreal," Campbell reflected.

Campbell, who is diabetic, was also concerned about her health during the incident. Near the end of the video, she can be heard saying, "I'm about to have a heart attack in a few minutes because my [blood] pressure's gone sky-high."

Legg has resigned, the department announced on Friday, adding that Georgia Bureau of Investigation will now be conducting its own investigation.