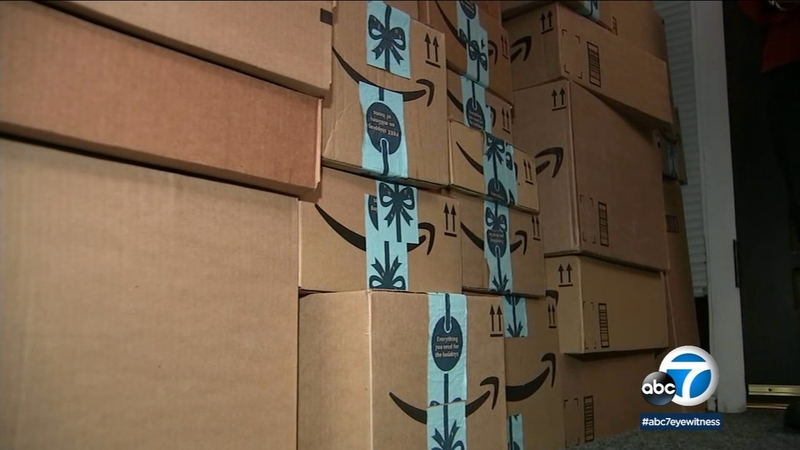 ROLLING HILLS ESTATES, Calif. -- A couple stumbled upon dozens of dumped Amazon packages that were left near a trash bin in Rolling Hills Estates.

The 34 packages all had destinations in Los Angeles and were found near a dumpster about 20 miles away from the city. Kim and his wife Valerie, who only want to use their first names, made the find during an afternoon walk.

They said they at first thought the boxes were empty.

"And then we got over and it was like, woah. None of these are empty. They're all full. It was a pile of stuff," Kim said.

They felt they had to bring the packages in, fearing they could be holiday gifts.

"You've got to figure at this time of year that probably nine-tenths of it are Christmas presents that were never going to get delivered. I said we've got to pull them in because these people need to get their packages," Valerie said.

RELATED: Holiday gift guide 2018: Everything you need to know to find the perfect gift

They then called Amazon and Valerie gave them the tracking numbers to figure out the carrier.

"This is a private carrier that Amazon hires to deliver these packages," Valerie said.

But exactly who left them behind and why is still a mystery.

"I don't know if it's somebody wanting to be done with work earlier that does deliveries for them and just wants to be done and not have to go make each individual stop," Valerie said.

Now the couple is left with the packages and awaiting instructions from Amazon.

"If these were one of my packages I would certainly be upset that they just got dumped," Valerie said.

Valerie said she later got a response from Amazon that she thought "read like a form letter" as if she had filed a complaint about a missing package. She went on to say that it provided no information or guidance about what she or her husband should do with the packages.