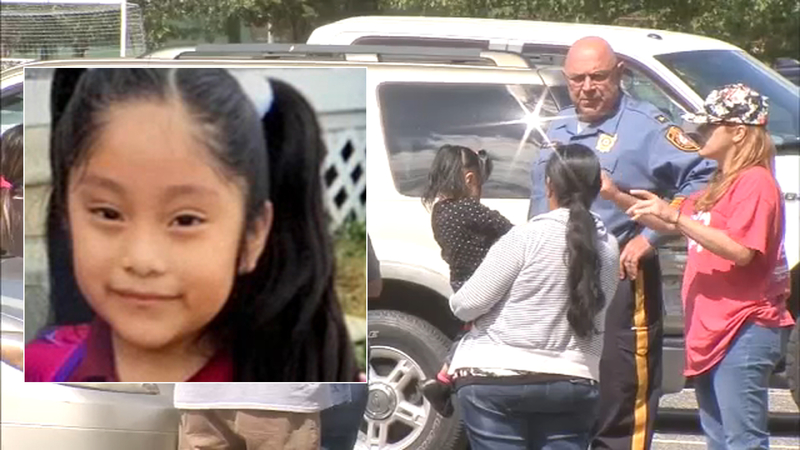 BRIDGETON, New Jersey -- The reward for information leading to the whereabouts of a 5-year-old girl who has been missing for five days in Cumberland County, New Jersey has grown to $25,000.

The FBI is offering $5,000 to help find Dulce Maria Alavez, who was last seen in a Bridgeton park around 5 p.m. Monday. This is in addition to a previously announced $20,000 reward.

An Amber Alert remains in effect.

EXPLAINED:What are the criteria for issuing an Amber Alert?

On Thursday evening, the family of the young girl issued a plea to anyone who can help find Alavez.

Grandmother of missing NJ girl pleads for help during a press conference on September 19, 2019.

"Please, if you have any information help us find my granddaughter. Do not be afraid of the police," said the child's grandmother through an interpreter. "We have not been able to eat nor sleep. You can't imagine what we are going through. We are very sad. Please help our family. I beg of you."

Investigators were at Bridgeton City Park with bloodhounds tracking the 5-year-old's scent. They picked up something for approximately an hour, but then lost it.

Investigators also visited the family's home, too, Thursday as they continue to search for the girl.

Video taken shortly before the Alavez's disappeared shows the child stopped at a store to get ice cream with her mother and brother.

At the time, Alavez was wearing a yellow shirt, black and white checkered long pants with a flower design and white sandals.

Once at the park, Alavez's mother Noema Alavez Perez said her daughter was playing on the swings with her 3-year-old brother, while she remained in a car with an 8-year-old relative approximately 30 yards away.

Authorities said they have reports Alavez was taken by a light-skinned, possibly Hispanic male, roughly 5-foot 6-inches tall. He was believed to be wearing orange sneakers, red pants and a black shirt at the time of the incident.

Police said the man led Alavez from the playground at the park to a red van with a sliding door and tinted windows. The man then allegedly fled with the girl.

In a press conference Thursday, Cumberland County Prosecutor Jennifer Webb-McRae said they are willing to expand beyond that theory.

"Our hope and expectation is that anyone who thinks that they saw anything that was remotely suspicious or could contribute to the return of Dulce to her family, we're asking them, we're appealing to them, we're encouraging them to come forward," Webb-McRae said.

Police also said they were interviewing possible witnesses who may have been playing basketball at the park on Monday night.

Family members have been in constant contact with authorities.

Dulce's aunt, Nayiber Alavez, said it's been very hard for the family.

"It's more harder for us because they're judging us that we had something to do with it -- when we don't," Nayiber Alavez said.

The fate of the little girl has motivated many in the community to join in the search as volunteers.

People gathered in Bridgeton Park Wednesday night for a vigil praying for the safe return of Dulce Maria Alavez. But with each passing day, some family members are losing hope she will be found alive.

The abduction has left other residents, many of them immigrants, fearful for the safety of their children.

"The truth is, we are immigrants, workers who came here solely to work in this country and we don't feel safe that someone is stealing our children," said Efren Hernandez.