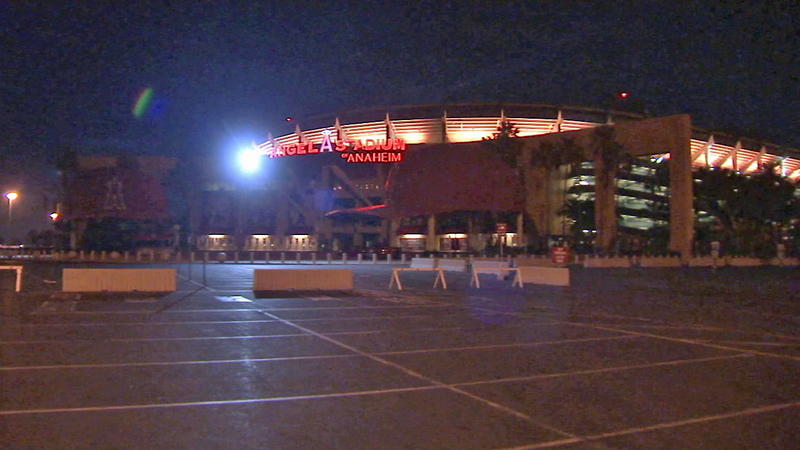 ANAHEIM, Calif. -- An Angels fan is in critical condition after being severely beaten in the parking lot of Angel Stadium after Friday night's playoff game.

Two witnesses, only identified as Sandra and her 15-year-old daughter, Morgan, spoke to Eyewitness News on Saturday about what they saw.

Both are diehard Angels fans. But they say they will never forget the brutal beating.

The vicious assault happened around 10:30 p.m. in the preferred parking lot outside Angel Stadium.

Sandra and Morgan said the victim and his cousin were leaving the game when the 43-year-old was suddenly attacked from behind without warning.

"This man started running towards another, and just started beating this guy. He had two punches, the guy went down, he was out cold, and then he started beating his face really bad on the pavement," Sandra said.

"He continued to punch him while he was on the ground, and that's what got me a little bit upset and a little bit scared. When he had ran a few steps away and came back, I started to get even more worried. Is he going to come after me and my mom, or go to anyone around, a witness?" she said.

As the suspect ran off with two other men, Sandra and Morgan rushed to help the victim.

"He wasn't breathing, so we went down to try to help, and we were trying to call someone to help. No one was coming, so he started turning purple," Sandra said.

The man was rushed to the hospital, where he was listed in critical condition Saturday night.

Anaheim police are looking for the suspects and an answer for the brutal attack.