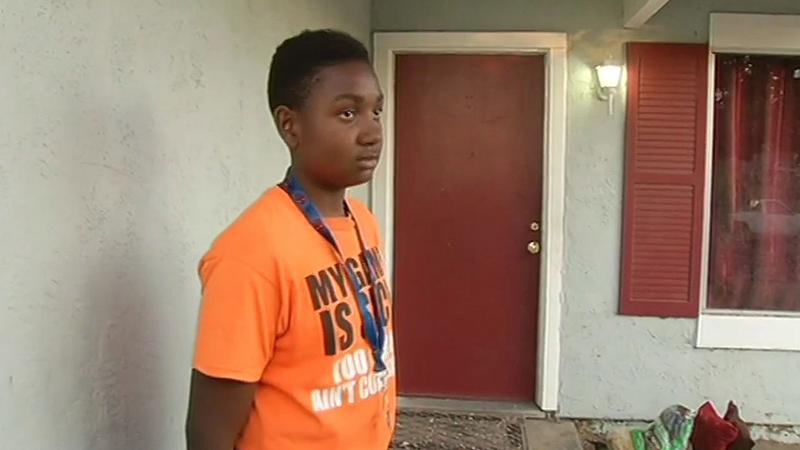 ANTIOCH, Calif. (KGO) -- A 13-year-old East Bay boy is being called a hero after an intruder tried to break down the front door and enter his home. Police in Antioch say he did exactly what he should have done to protect his two younger brothers.

The boy's mother says she wants to thank the Antioch Police Department because officers arrived in record time.

Her sons were enjoying their first days of summer vacation when a burglar walked right into their home.

"The first time, he just walked right into our house. Then, that's when my dog scared him out and then he came back trying to bust into the house," said 13-year-old, Redman Collins.

Redman says he locked all the windows and dead bolted the front door, but at that point the man was trying to break it down.

His mom was at work while Redman and his two younger brothers were home alone with their dog, Prince.

"So they went in my mom's room and then we just closed the door, made sure it was locked and everything, so he wouldn't get in," Redman said.

Redman said he stood by the front door with a long kitchen knife in hand, but he saw how big the burglar was and realized he might need a bigger weapon, so he picked up a bat. Redman said if the man got in, he would have hit him in the head so he would be unconscious. He said he was ready to protect his family.

But before the man could break down the door, Antioch police pulled up and arrested 39-year-old Terrel Freeman. Redman's sister, Jasmine King, recognized him as the man who followed her home from the bus stop a few days ago.

"I don't know, if was here, then I don't know what would have happened," Jasmine said.

"He acted appropriately. He took steps and measures to defend his brothers and the household like a brave young man," Joneeca King, Redman's mom, said.