KABC
By ABC7.com staff
PERRIS, Calif. -- The aunt of 13 malnourished adult and juvenile children, some of whom were chained to furniture in a filthy Perris home, spoke to "Good Morning America" in an emotional interview, saying she was shocked to hear about the abuse because her sister and her family isolated themselves from the rest of the world for several years.

In an exclusive interview, Louise Turpin's sister, Elizabeth Flores, said she hasn't had a close relationship with her sibling for about 20 years, though she attempted to reach out and speak to the children for many years.

Flores said as young parents, the Turpin couple seemed very strict, but Flores did not notice signs of abuse.

Flores said when she was younger and in college, she briefly lived with the couple. As for her brother-in-law, David Turpin, she said he made her uncomfortable at times.

"If I were to get in the shower, he would come in there while I was in there and watch me, and it was like a joke," she said. "He never touched me or anything."

Flores said that at the time, she was very young and treated as if she was a child. She never told anyone about the way David made her feel.

"Now that I'm an adult and I look back, I see things that I didn't see then," she said.

Flores said her parents had tried to fly out to see Louise, David and the children, but the couple turned them away.

"She told him to not come. He got the ticket, he was going to surprise her, and he called her to tell her he was coming and she told him not to come," Flores said.

When asked why they didn't question the family's isolation, Flores said she didn't find anything to be weird because the couple kept to themselves even before the children were born.

As for what she would say to her sister now, Flores cried, "I want her to know that she's still my blood, and I love her. I don't agree with what she did, and her actions have made the whole family suffer."

The Perris couple accused of torturing their children and shackling them in filthy conditions are expected to be in court Wednesday.

David and Louise Turpin each face 19 counts of torture and child endangerment.

Authorities found some of their 13 malnourished children - ranging from 2 to 29-years-old -- chained to furniture inside the home, after one of the teens escaped and called 911 over the weekend.
Report a correction or typo
Related topics:
los angelescaliforniachild abusecrimetorturearrestparents chargedchild endangerment
Copyright © 2020 KABC-TV. All Rights Reserved.
RELATED 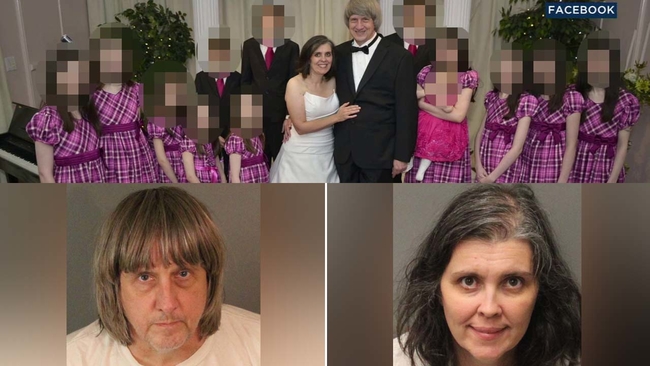 Grandparents: 'God called' on SoCal couple to have so many kids
More Videos
From CNN Newsource affiliates
TOP STORIES