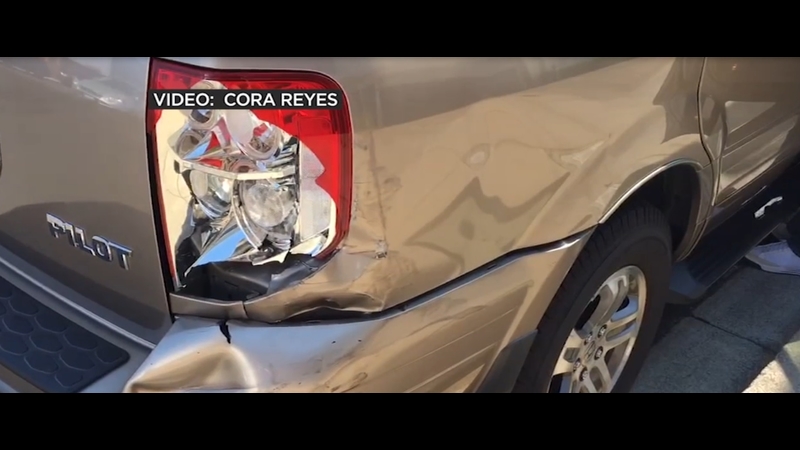 DALY CITY, Calif. (KGO) -- Normally a dent isn't considered a total loss, but that's what the DMV tagged one car that belonged to a local woman.

Daly City police told this woman her parked car was struck by a hit-and-run driver. What happened to her later only made things worse.

Cora Reyes walks to her Honda Pilot parked outside her Daly City home.

She points out where the driver hit her car.

"The car was parked here and we were surprised how come it was not hit on that side. It was hit on this side which is inside," said Reyes.

This is video Cora took of the damage to her 2004 vehicle.

Prosecutors convicted the driver of one count of alcohol related reckless driving.

His insurance company agreed to pay for the repairs.

But the DMV refused to give Cora a new registration sticker when she tried to renew her registration.

Her car had been designated a total loss.

"The lady said we cannot just keep giving you sticker. You had to take care of this. I'm caught in the middle," she said.

A car is defined as totaled if the cost of repairs is more than the car is worth.

In this case, an auto body shop estimated repair costs at $3,600.

A totaled car is designated a salvage vehicle if it is repaired.

Cora recalls her discussion with the DMV.

"It says salvage. You have to pay for the salvage fee."

That would would be an additional $94 above the cost of registration.

Why did the DMV list Cora's car as salvaged? Cora traced the mistake back to the insurance company of the driver who smashed his vehicle into hers.

Alliance admitted it mistakenly sent a letter to the DMV listing Cora's vehicle as salvaged.

"There was another car that was also hit."

"By the same driver and that car was totaled."

Alliance Insurance sent the DMV this letter acknowledging its mistake.

Even with that letter, Cora registration remained in neutral. It seems the letter from Alliance was misdirected.

"So I don't know where to go. I called you guys. I think I was crying because I was losing hope."

We contacted the DMV and it told us it "was able to contact the insurance company on the customer's behalf and they confirmed the error on their part... This was an unusual situation but the DMV was able to assist the customer in resolving this matter."

"I want to thank you guys. I have peace now," said Cora. Thank you very much."

Cora tells us she'll sleep a lot better now that this is over.

Report a correction or typo
Related topics:
automotivedaly citycar crashdmvcar accidentinsurancedrunk driving7 on your sideaccidentconsumercaliforniaalcohol
Copyright © 2021 KGO-TV. All Rights Reserved.
7 ON YOUR SIDE