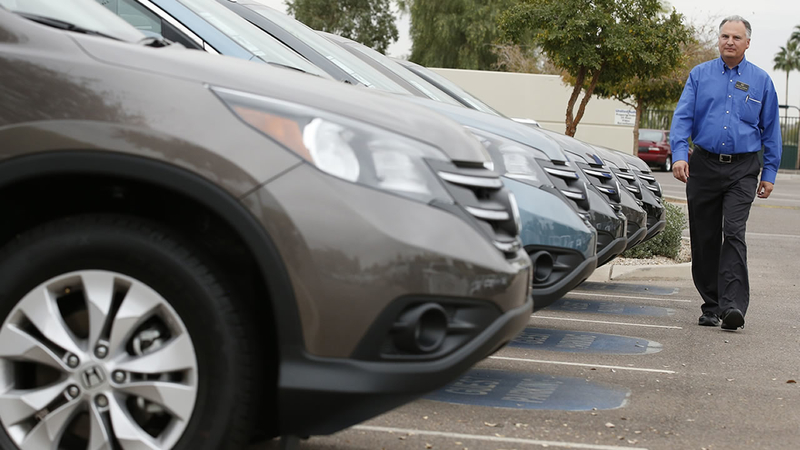 SONOMA, Calif. (KGO) -- An increasingly popular way for people in debt to get cash is under intense scrutiny.

If you own a car, you're likely to qualify for an auto title loan. However, a Sonoma woman found out it comes with incredible risks.

Toni Teixeira was one of the lucky winners of Graton Casino's Car-a-Day Giveaway.

The Sonoma resident who has since become mostly bedridden from a hip problem could barely walk up to claim her prize that day last year. "And they were all yelling, 'here she comes, she's coming, she's right here, she's right here,"' Teixeira said.

The car was free, but Teixeira was responsible for paying $4,000 in taxes and for the extended warranty she bought.

It was money she didn't have, so she got an auto title loan. "All you have to do is go in with the title to your car and your ID," Teixeira said.

A new state report just released found the number of auto title loans issued in California between 2011 to 2014 went up 179 percent.

Consumers borrowed nearly $382 million during that time, but Joe Ridout of Consumer Action says such loans are a bad idea. "Auto title lenders bear little resemblance to mainstream lenders. They much more closely resemble a ring of car thieves operating with the blessing of the state," he said.

Nearly 93 percent of auto title loans in California had interest rates of 70 percent or higher.

Half charged the interest rates of 100 percent or more. "Like all predatory lenders, car title lenders claim that they are giving you a life preserver at a time when you're in financial difficulty. What they don't tell you is that life preserver is made out of concrete," Ridout said.

Loanmart which lent Teixeira the money told 7 On Your Side in an email that it "prides itself in offering access to capital for those who may otherwise find it difficult to obtain it. Additionally, all fees and costs are disclosed to applicants."

Teixeira admits she should have read the loan agreement more closely before signing it.

When she realized she would be charged more than 85 percent interest, she decided to sell her car to pay off the loan. "I could have gone downtown to a loan shark and gotten a better deal," Teixeira said.

Those who fail to repay their loan could lose their car. The Consumer Financial Protection Bureau is currently drafting new federal regulations of auto title and payday lenders. The proposal is expected to be released by the end of the year.
Related topics:
automotivesonomacasinobusinesscar7 on your sideloans
Copyright © 2021 KGO-TV. All Rights Reserved.
7 ON YOUR SIDE
Can you afford to voluntarily quit your job?
EDD sending 'conditional payments,' but critics still skeptical
Why you may want to opt out of monthly Child Tax Credit
CA EDD to begin distributing benefits to claimants this week
TOP STORIES
CDC warns Delta variant is as infectious as chickenpox
Here are the Bay Area cities with the lowest vaccination rates
Palo Alto Unified to outsource online learning
Bay Area companies, big and small, issue COVID-19 vaccine mandates
Oakland community ambassadors hit the streets amid spike in robberies
3 Bay Area counties may be 1st to mandate masks again
Delta variant may force couples to reschedule weddings, again
Show More
More of Bay Area moves into 'exceptional' drought
Mattel: Toy prices to rise this holiday season
Federal workers required to get vaccinated; military may be next
'Arthur' to end at PBS Kids after 25 years
Pilots near LAX warned after 'possible jetpack man' spotted
More TOP STORIES News