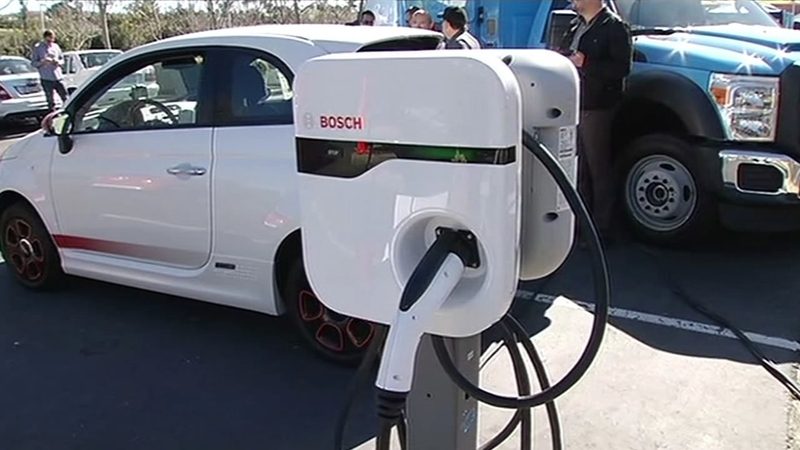 SAN JOSE, Calif. (KGO) -- Automakers are hoping 2015 will continue to see strong growth in sales of electric vehicles. The momentum is being fueled by speculation that Apple is working on systems for dashboards, and may actually be building its own car as well.

Most of the automakers already have outposts in Silicon Valley, so they know how disruptive new technology can be. Talk that Apple might be secretly building an electric car has dominated this week's Geneva International Motor Show. One carmaker CEO told reporters not to ask about Apple.

"That's a plus," said VW dealership owner Ron Dirito. "It's definitely the best technology, so let's go with the best that we have, and let's make it a very exciting car."

The electric vehicle, or EV market, is still small. Of the 16.5 vehicles sold last year, 118,500 were electric vehicles. But it's growing fast, up 27 percent in 2014. And consumers are starting to speak of their cars like digital devices.

"I wouldn't be surprised if pretty soon there's a way to upgrade the software virtually to your car," said Pacifica resident Jane Myles. "I know Tesla can do that. It wouldn't surprise me if that can happen in other models, too."

With that in mind, Marc Korchin of McKevitt Fiat says 9 out of 10 electric Fiats he sells are short-term leases.

"In three years, if there's something cheaper or longer range or both, they're not totally married to the car, and they still get all of the state and federal incentives by leasing as they would by buying," he said.

A few weeks ago, PG&E unveiled plans to install 25,000 charging stations. That's helping to ease anxiety over limited range of EV's. The utility also is encouraging employees to buy EV's.

"We just kicked this program off three months ago and the initial response has really been overwhelming," said PG&E spokesperson Jason King. "We had between 300 and 400 employees already adopt plug-in electric vehicle or pure electric vehicle."