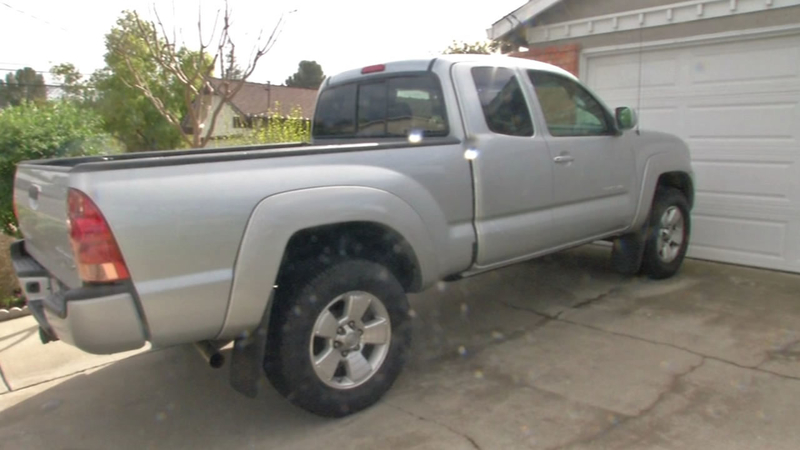 MARTINEZ, Calif. (KGO) -- A Bay Area woman was afraid her pick-up could catch on fire after receiving a recall notice.

When a fix wasn't immediately available she took matters into her own hands and called on 7 On Your Side' for help.

Toyota released its first recall notice about an issue with the suspension in the Toyota Tacoma in 2014. Since then, it has issued several more for the same issue.

Christy Ridenour has been receiving recall notices about her 2007 Toyota Tacoma truck for more than two years. The leaf spring can come in contact with the fuel tank and rupture it, causing a fire.

The notice warns, "If an audible clunk or bang can be heard, please contact your Toyota dealer immediately."

Late last year, the Martinez resident began hearing that menacing sound. Ridenour took her vehicle into a Toyota dealership. The notice she received from Toyota was actually an interim notice. The automaker had not yet found a fix.

Consumer attorney Mark Anderson explains: "It can take months because there could be hundreds of thousands of vehicles affected and they don't stock hundreds and thousands of those particular parts."

Fix or no fix, Ridenour didn't want to drive the vehicle and risk the fuel tank capturing fire.

"I don't want to die getting into an accident, burn up or I mean the consequences here seem kind of serious," Ridenour said.

Ridenour says Toyota finally told her it would reimburse her if she took her car to an independent mechanic to replace the leaf spring.

She did, but she says Toyota denied her claim for reimbursement because her leaf springs were not cracked or corroded.

Anderson says that doesn't match up with what Toyota states elsewhere. "That's contrary to the frequently asked questions that's available in the Internet," she said.

Frustrated, Ridenour turned to 7 On Your Side for help. We called Toyota

Toyota refused to comment on Ridenour's situation, but said customers who have paid for a repair to their vehicle for this specific condition can find detailed instructions for submitting a reimbursement request

Toyota has since reimbursed Ridenour for her repairs. That's left her in a good mood.

A formal recall was announced a day after Ridenour contacted 7 On Your Side, but only on the East Coast, due to a limited availability of parts. The recall is expected to be announce in the Bay Area in mid-April.
Related topics:
automotivemartineztoyotaauto recallhoverboardcar7 on your sideconsumerconsumer concerns
Copyright © 2021 KGO-TV. All Rights Reserved.
7 ON YOUR SIDE
Can you afford to voluntarily quit your job?
EDD sending 'conditional payments,' but critics still skeptical
Why you may want to opt out of monthly Child Tax Credit
CA EDD to begin distributing benefits to claimants this week
TOP STORIES
SF tenants get 6-figure buyout to leave luxe unit
Coronavirus updates: SF in midst of 4th surge due to Delta variant
Disney joins list of companies requiring vaccine for nonunion workers
CDC document warns delta variant spreads as easily as chickenpox
Here are the Bay Area cities with the lowest vaccination rates
What we know about the delta variant
Things to do in Bay Area: Aloha by the Bay, Sonoma County Fair
Show More
'Hamilton' in SF to require proof of vaccination, masks
SF Giants reach trade deal to acquire Kris Bryant from Cubs
WNBA expansion team may be coming to Oakland
Hundreds of SF bars now requiring proof of vaccination
CDC mask decision followed stunning findings from Cape Cod outbreak
More TOP STORIES News