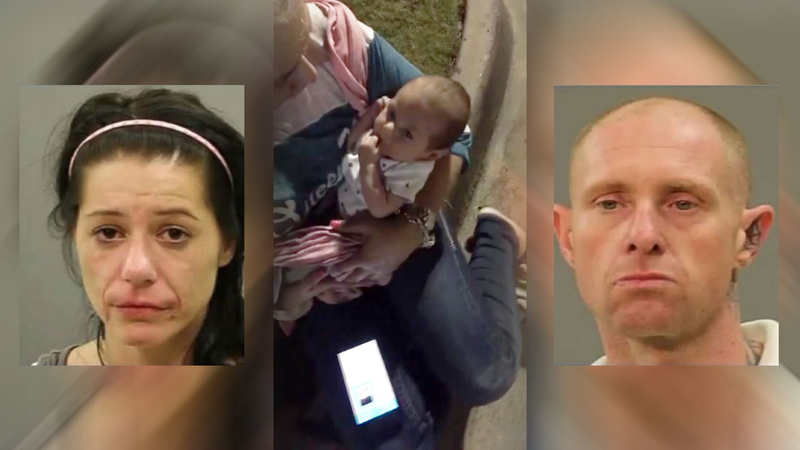 HOUSTON -- We expect to learn more today about two parents accused of leaving their infant in his car seat on the ground of a busy west Harris County parking lot.

Sarah Shibley, 33, and Gary Collins, 39, are due in court this morning, charged with endangering a child.

Both were arrested Tuesday night after a man found the 8-week-old baby boy in a parking lot at Westgreen Boulevard and the Katy Freeway. That man then handed him over to Dee Griffin-Stevens, a mother of three.

"I was crying. I was crying because I couldn't believe it was happening," Griffin-Stevens told Eyewitness News.

Within moments, she had her hands full with the precious baby, and she held him tight and kept him warm until first responders arrived.

Griffin-Stevens had just finished dinner with her friend. Authorities estimate the 8-week-old had been alone for 45 minutes in the parking lot when the man found him.

Griffin-Stevens' friend recorded the dramatic moments afterwards on video. A hint of anger is apparent in her voice.

In all, it's believed the parents were without their baby for an hour and a half. Shibley returned to the scene and was crying when she was arrested. In the couple's first court appearance Wednesday afternoon, a prosecutor relayed Shibley's side of the story.

"Mrs. Shibley advised she walked out of work with the child in her hand and placed him on the ground. She says she thought Mr. Collins grabbed the child and put him in the vehicle. Apparently, nobody did," the prosecutor said.

Both Shibley and Collins requested court-appointed attorneys. Their son is in CPS custody as workers look for relatives to care for him.

A CPS spokeswoman described him as a "happy, healthy, chunky baby who looks as if he has been cared for."

It was an ordeal Griffin-Stevens will never forget.

"I told him I loved him and I'm praying for him. I hope he ends up where he's supposed to be, because being alone at night in a car seat with no bottle, no love, no blanket is not where he's supposed to be."
Related topics:
katychild rescuedparents chargedchild endangerment
Copyright © 2021 KTRK-TV. All Rights Reserved.
TOP STORIES
EXCLUSIVE: Man's dashcam catches 'blatant racism' by autoworkers
Estrada Fire grows to 150 acres in Santa Cruz Co., CAL FIRE says
Car collides with AC Transit bus, sending it into Oakland home
IN kids mistakenly get COVID vaccine instead of flu shot: parents
La Niña winter weather: How it could impact CA wildfires
Preliminary magnitude 3.4 earthquake rattles North Bay, USGS says
SF, Marin counties ease mask restrictions Friday
Show More
Pushback after BART approves mandatory employee COVID vaccines
Bay Area health officials share guidelines for safe Halloween
3 fires break out within 8 hours in SJ, including at a school
Victim of the Bank of America, Zelle scam? Here are your rights
FDA panel endorses booster shot for J&J COVID-19 vaccine
More TOP STORIES News