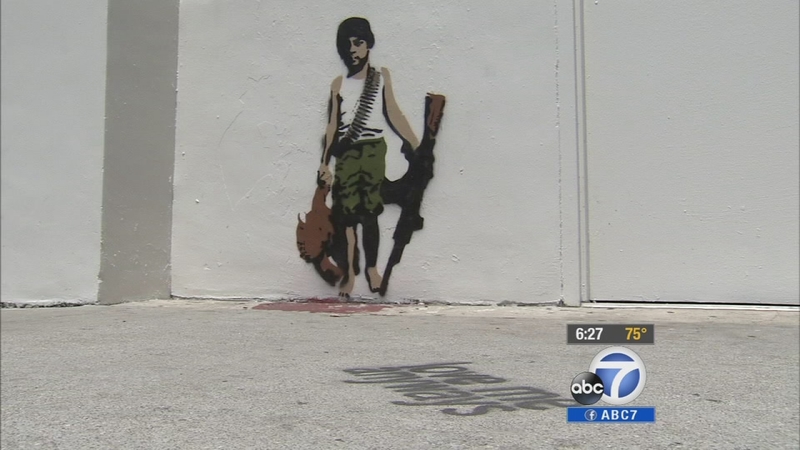 MELROSE DISTRICT, LOS ANGELES -- An art mystery is getting a lot of attention around town: Overnight, a 3-foot-high graffiti image appeared on a wall in the Melrose District of Los Angeles. The big question: Who put it there?

Is it a piece of stencil art? Graffiti? Or is it a Banksy original?

Banksy is a famously secretive British artist known for leaving his work in public places.

The painting is of a figure holding an assault rifle in one hand and a teddy bear in the other. It was first noticed Wednesday morning on the white wall right next to an ATM on the 7200 block of Melrose Avenue.

The area is littered with so-called street art -- or would you call it graffiti?

If the artwork turns out to be an actual Banksy, it wouldn't be L.A.'s first. The mysterious street artist left his mark on a gas station wall back in 2008. Last year, that entire wall was auctioned off in Beverly Hills for $209,000.

But is this really a Banksy? It's not listed on the British artist's website, and his representatives haven't returned calls to Eyewitness News.

But the owners of the wall may want to keep their eyes on this little soldier.

"What you going to do, cut the wall out and take it home with you? Well you know what? This is L.A.," said Koreatown resident Adi Shaku. "Somebody might try to do something like that."