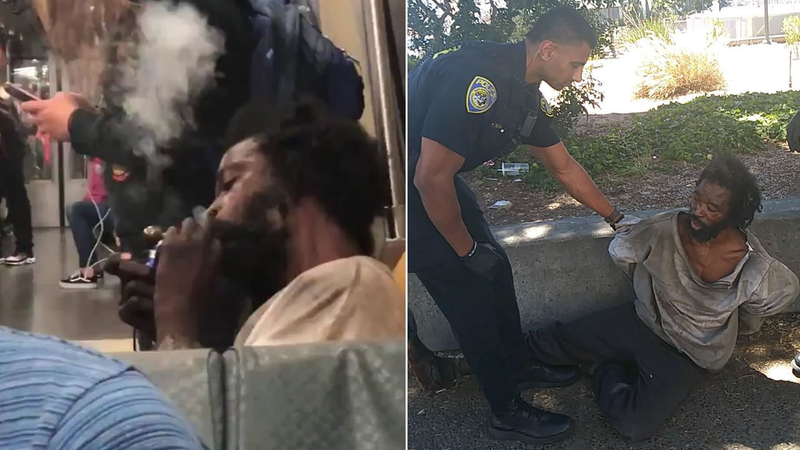 OAKLAND, Calif. (KGO) -- The BART passenger repeatedly seen smoking meth on the train is now in jail, giving fellow passengers a reprieve from his secondhand smoke.

The passenger's use of drugs while on board, on the priority seats no less, offended many people who were forced to inhale the toxic smoke. He was arrested Sunday, but not for drug use.

Officers arrested him on a felony no bail warrant. They found him after getting a call from Oakland resident Ron Thomas.

Thomas said he called police after seeing Daniels harass merchants near the Lake Merritt BART station. He had also recognized him from an ABC7 News story that reported on Daniels repeatedly smoking meth on the train.

"Right in front of everybody, the way he was doing it. It was just like, 'I don't care.' Deal with it type thing. And that's how he is around here. Whatever I do, deal with it," Thomas said.

A BART spokesperson told ABC7 News' Vic Lee there was little they could do about Daniels' drug use.

Either an officer has to witness it or a witness has to report it and be willing to stay until police arrive.

Plus, a low level drug offense is usually only worth a citation. But officers were able to detain him this time because of the warrant out for his arrest.

Daniels was wanted for being an accessory to a crime, a felony. There's no telling how long he'll be in jail.

Even so, Thomas says he's happy he's no longer around, at least for the time being.

"I feel like he needed to go, to be evaluated at this point," he said. "It seems like he needs to be somewhere where they could do a real evaluation of what his needs are."

News of the arrest drew mixed reactions from passengers -- ranging from sympathy for Daniels, to relief that they won't have to worry about inhaling his smoke for now.

"The residue of it. The smell of it. It affects other people and especially if you have kids traveling on BART, it's even worse," said BART passenger Fredette James from El Cerrito.

"This guy needs help and this shouldn't be happening in public and he doesn't know any better, obviously," said BART passenger Hannah Clayton from San Francisco.

BART Police say arrests are up significantly -- up 16 percent from this time last year. They say it's because their officers are more visible and responding more quickly to concerns reported by BART riders.

#BART Police arrest passenger known for smoking meth on train for an outstanding felony warrant. He’s now in jail, so fellow passengers should get a reprieve from the secondhand smoke. #Oakland pic.twitter.com/IrKcjN5KQ0