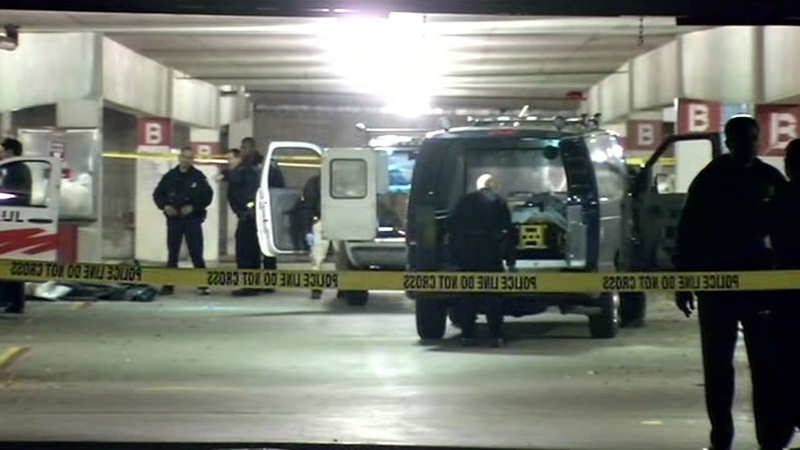 Body found in U-Haul connected to shooting of BART cop

HAYWARD, Calif. (KGO) -- Authorities retrieved the body inside a U-Haul Friday night at around 8 p.m. at the Hayward BART station. It's the same place where police say a man opened fire on a BART police officer, wounding him.

The discovery of that body is a turn in an already disturbing Christmas day shooting. One officer was shot by a man who was acting suspiciously near a U-Haul rental in a parking garage.

That man was injured in return gunfire and investigators are trying to figure out why there was a dead body in the U-Haul truck.

Police officers pulled a shovel, gas canisters, some sand bags and several tarps from the bed of a U-Haul rental truck Friday night. The Alameda County coroner collected the body of a dead man.

"One officer saw a U-Haul that had a smashed out window and the suspect was walking away as he approached," said BART Deputy police Chief Jeffrey Jennings.

Witness says he heard approximately 6 shots to officer, shot in shoulder and 1 to suspect. Both taken away in ambulances.

The suspect is 28-year-old Charles Goetting who's on probation. Police were about to search him when he pulled a gun and started firing, hitting one of the officers.

A witness shared a photo of emergency crews helping Goetting. Maricio Palma and his dad saw what happened and began helping the officer who was hit in the exchange of gunfire.

"We were taking off his jacket to see what happened. My dad got the gloves to like, to take off his shirt to see like where the bullet landed," said Mauricio Palma, a witness.

The policeman was hit in the arm and was treated and released from Eden Valley Medical Center. It was the same hospital where the suspect getting was taken. He is facing several charges, including attempted murder of a police officer. It's not clear how he may be connected to the dead body found in the U-Haul truck he walked away from.

Suspect used stolen gun (not stolen from law enforcement) and had U-haul w/swapped plates, prior record including drug and burglary charges