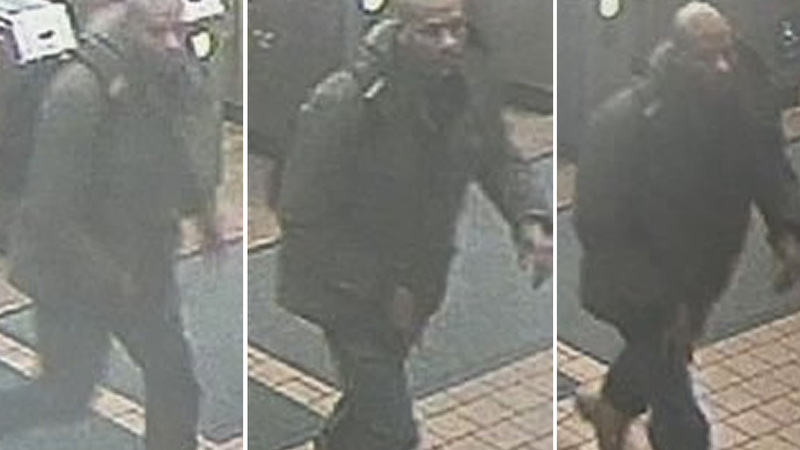 The images were captured by station security cameras near the station's fare gates. The suspect is seen leaving the station after the fatal shooting on board an SFO-bound train.

BART officials said the last time they had a shooting was sometime in the 90s. "This is a pretty brazen, random act," BART Police Department Chief Kenton W. Rainey said. "It's just not something that normally happens at BART. And I would imagine for the people in this room. It wouldn't happen on your street," he added.

BART police said the victim and the gunman apparently had no interaction on board the train.

The suspect is described as a slim, bald African American man about 6 feet 2 inches tall. He was wearing a green hooded jacket, blue jeans, and tan military boots. He is believed to be in his 20s or early 30s.

Investigators refused to release any video from their surveillance cameras on board the train fearing it could compromise the investigation.

There are still questions whether all cameras were working at the time. "We have a pretty robust camera system. We have cameras on our trains, we have cameras on the platforms," Rainey said.

Cellphone video shows passengers trying to hide behind their seats and their luggage.

BART police have confirmed the victim had a knife on him, but have not been able to identify him because he had no identification. He's described as a young Latino man. "At this point, it's unknown the relationship between the victim and the suspect," Rainey said.

The alleged shooter ran past turnstiles and disappeared into a neighborhood in West Oakland. At the time, there were no BART officers patrolling the station. Rainey said his investigators do not believe the shooting was terrorism-related.

BART director Zakhary Mallett says police presence is a top concern for BART riders. He told ABC7 News over the phone, "Of course we would love to have officers everywhere but there's a practicality to doing that, and it's not practical or financially feasible."

BART's police chief won't say whether or not there was video taken from the camera on the train. But Mallet says not all of the cameras are actual cameras. In other words, they're decoys.

Despite the lack of resources, BART police say violent crime against people has dropped 10 percent in the last year.

#BART police chief says someone must know the man who shot and killed another on a train. #WestOakland pic.twitter.com/4PkC9SXbua

#BART police Chief says the victim is possibly Hispanic, but there’s no information to confirm that. https://t.co/T5qi6FxogG

#BART spokesman says there is no info to suggest Saturday's shooting was a terrorist attack. https://t.co/AI95fOo9b2 pic.twitter.com/OMsI4aXEh2

#BART police spokesman says there are an abundance of cameras at train stations. https://t.co/AI95fOo9b2