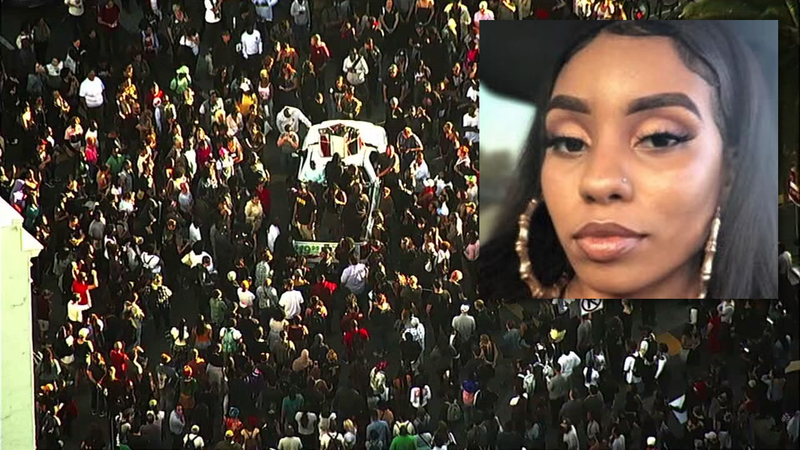 OAKLAND, Calif. (KGO) -- A vigil turned demonstration was filled with frustration in Oakland as family, friends, and supporters of Nia Wilson gathered at the Oakland BART station where the 18-year-old was stabbed to death Sunday night by a stranger.

"I feel that the community has failed people of color for one. I feel that BART has failed us from the beginning with Oscar Grant," said Jinina Knox, a friend of Wilson's family.

She and hundreds of others gathered at the station and and spilled on to the street while they expressed their outrage.

"How do we let a man get on BART, slit a woman's throat, stab her to death, and walk off through our community and no stopping him?" Knox questioned.

Letifah is Wilson's older sister. She had a bandage on her neck where she was stabbed.

The sisters were leaving a family gathering together when police say John Cowell attacked them with a knife.

"She's just yelling my name, 'Tifah, Tifah, Tifah' and I said, 'I got you baby, I got you,'" Letifah told ABC7 News. "And I looked back and he was wiping off his knife and stood at the stairs and just looked."

Behind the megaphone and between the chants, there was also silence and tears -- evidence of deep suffering in Oakland.

"Part of the pain and the anger here today, yes, is about this horrific crime which must be denounced," said Oakland City Councilmember Rebecca Kaplan. "But also about the broader pattern of black people being arrested and pulled over when black people are victims of violence feeling that it's taken less seriously."