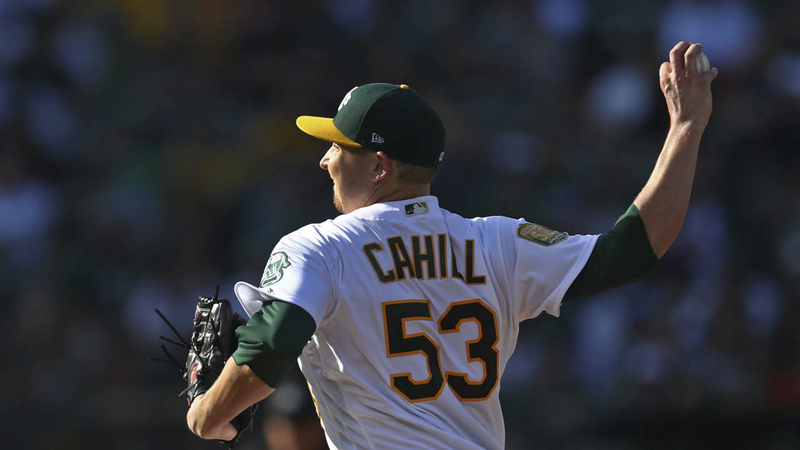 A's beat Giants in Battle of the Bay game

OAKLAND, Calif. (KGO) -- A fleet of baseball fans honored baseball history and made some more at Saturday night's Bay Bridge Series game between the Oakland Athletics and San Francisco Giants.

Jonathan Lucroy singled home Matt Chapman in the 11th inning to give the A's a 4-3 victory over the Giants.

Hours after acquiring reliever Jeurys Familia from the New York Mets, the A's improved to a major league-best 22-7 since June 16 with their third win in five games against their Bay Area rivals.

Oakland squandered a 3-2 lead in the ninth and wasted a bases-loaded opportunity in the bottom of the inning before winning on Lucroy's second walk-off hit this season.

The sellout crowd is the largest attendance in A's Coliseum history.

"Like whenever I turn my head there's a person," noted Talia Perl, a young A's fan. "It's so crowded and sometimes I can't walk," added her younger sister Ava.

"It's awesome. I've been waiting my whole life for them to open up that top section," said Adam Halsey, A's fan.

The top section, which opened for the first time in 13 years is known as Mount Davis. There are sweeping views of the East Bay and San Francisco from a top it not to mention a long look down at the field.
"He's a little scared he was telling me he was shaking. He was like, 'hold my hand mommy,'" said Denise Belli, an A's fan seated on Mount Davis.

"At the time it wasn't a big deal," said Dennis Eckersley, Hall of Fame pitcher for the A's Championship Team.

But now A's legends are back for their long overdue parade. Eckersley's happy to see the A's renaissance.

"You take for-granted that when we played here we drew almost 3 million people. What it tells you is if you win they will come," said Eckersley.
Or build it and they will come, which is what A's President Dave Kaval is hoping for with a new stadium.

"It's going to be important for the community to actually rally with the A's to find the best location, but the plan together, these types of events give us the momentum to make that happen," said Kaval.

He hopes to have an economic agreement with the City of Oakland or the Port by the end of the year so they can build a stadium by 2023.