KGO
By Lyanne Melendez
MARIN COUNTY, Calif. (KGO) -- King tides made for great pictures Tuesday around the Bay Area. Expect more high tides Wednesday and Thursday. That's when the next storm will hit, which will certainly bring flooding in some areas especially in the North Bay.

RELATED: Marin battens down hatches, pilings ahead of king tides

The king tide caused flooding in the usual areas of Marin County. Cars tried to navigate their way through these waters.

Caltrans closed the exit off Northbound Highway 101 toward Mill Valley. Conditions made it dangerous for some drivers. Still, despite the road block, some decided to take their chances. Even bicyclists had a rough time when riding through the flood zone.

Those along Greenbrae Boardwalk know the king tide can change the scenario here. "It's like ankle deep where we are standing right now when tides come up and we don't have a problem unless there is a lot of rain first, and then the tide and then it's knee deep," said Fred Dupuis, a resident of Greenbrae Boardwalk.

In San Rafael a public works crew removed any dirt runoff that could potentially block drains. When that happens, a parking lot in the Canal District floods. The preparations were in advance of Thursday's storm and another expected king tide.

Public works announced it will have a few crews starting at 4 a.m. Thursday to respond to flooding.

"You'll have king tides, the bay is full, the system is full when we get two or three inches of rain withing a 24 hour period," said Mark Wright of San Rafael Public Works. "There is nowhere for the water to go and that's what creates the localized flooding."

Residents of a mobile home community in the area were ready to face Thursday's storm.

"We keep sandbags ready and the community actually down by the boardwalk, there is a gentleman who puts out a water bladder that's like a levy," said mobile home park Manager Steve Kidd. 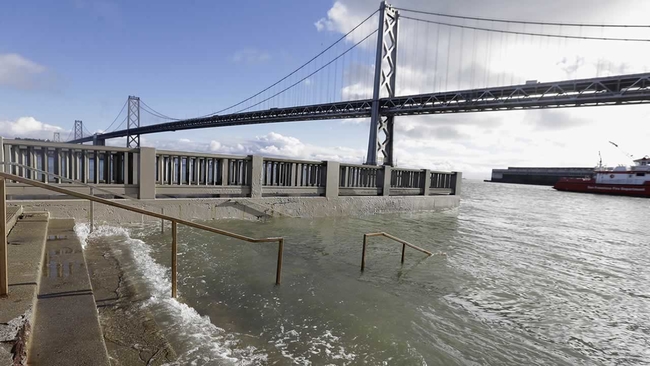