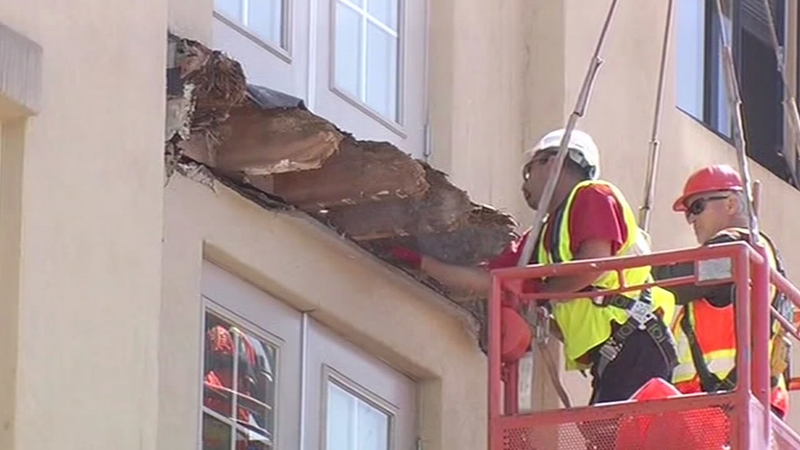 BERKELEY, Calif. (KGO) -- The official investigation is underway to find out why that balcony collapsed in Berkeley Tuesday morning, killing six young people and injuring seven. But, a growing number of experts have already made up their minds -- they believe the deck failed because it wasn't waterproofed properly.

The construction company that built the apartment complex has been sued before over allegations of dry rot and substandard balconies at two of its other projects.

When city workers removed what was left of the balcony at Library Gardens to preserve it for the investigation, pieces of the wooden joists just crumbled in their hands -- clear evidence of water damage to the support beams.

Danmeier: "That indicates the extent of that rot which is pretty severe."
Dan: "Pretty severe in your opinion?"
Danmeier: "Yes."

Danmeier tells Noyes it's clear the waterproofing was not installed properly by the time the building opened in 2007. The balcony should have had metal flashing under the door sill, connected to a waterproof barrier on the deck.

The I-Team learned Wednesday afternoon Thomas P. Cox Architects designed the building and Segue Construction built it. No comment from Cox so far. Segue construction settled two lawsuits in 2013 over allegations of dry rot and substandard balconies at projects in Millbrae and San Jose. A spokesman for the company tells me those lawsuits have no bearing on what happened in Berkeley and that "Segue construction has built more than 6,000 apartment units and has never had an incident like this in its history."

Darrick Hom, President of Structural Engineers Association of Northern California, tells us, "One of these events, rare events, that occur like this tends to get everybody's nerves rattled."

There's no question that balcony was crowded before it gave way.

To show you, the I-Team taped an outline about the size of the deck and asked 13 tourists to stand inside. That's how crowded it was, if all the victims were on the balcony at the same time. But, the deck should have held -- it was well within the sixty pounds per square foot building code.

Wednesday, city inspectors issued this notice of violation to Library Gardens, saying the balcony below the one that collapsed "is structurally unsafe and presents a collapse hazard endangering public safety."

They gave the owners 24 hours to remove the balcony.

Hom believes, "The fact that they have requested that the third floor balcony be removed means that the same existing conditions of the deterioration or decay of the wood is significant and serious enough that they would warrant having to remove it."

Danmeier is concerned that the water damage goes farther inside the building: "We want to make sure, somebody should make sure, that the joists aren't deteriorated back into the interior of the building. That rot will spread latterly both ways, so what we don't want is floor failure on the inside."

Berkeley Mayor Tom Bates also said he believed dry rot played a role in the collapse. He then had to back off, stating it was his personal opinion and that city investigators have not reached a conclusion. We'll stay on top of it.

Seque Company Statement:
"Our hearts go out to the families and loved ones of the young people who died or were injured in this tragic accident. We have offered our assistance and full cooperation to investigating authorities. We cannot provide any additional information at this time as we are still awaiting further details.

Segue Construction has built more than 6,000 apartment units and has never had an incident like this in its history.

Lastly, litigation regarding balconies in San Jose has no bearing on this tragedy. Such litigation is common to major construction projects."