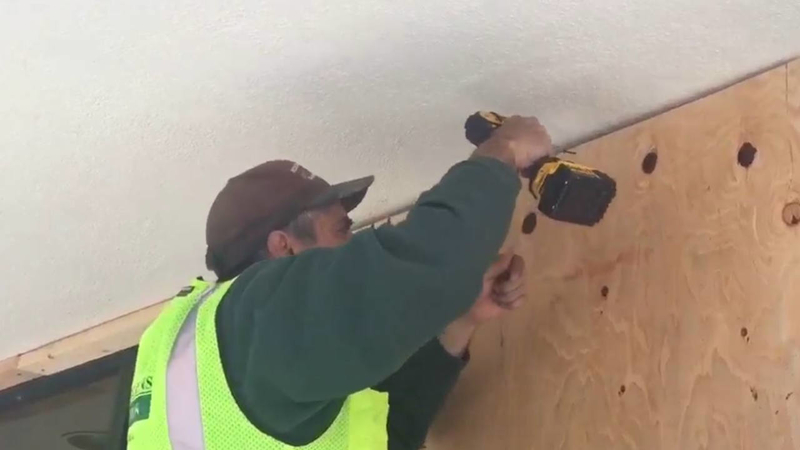 BERKELEY, Calif. (KGO) -- Some businesses in Berkeley are boarding up their windows ahead of another round of dueling protests over President Donald Trump planned for Saturday.

The city of Berkeley says there will be no extra police or a different approach to the protest just five weeks after the March 4th rally that resulted in violence and arrests.


Matthai Chakko is a spokesman for the city of Berkeley, which had officers surrounding the park last time, but with very little direct intervention. "We're going to make sure we facilitate the expression of free speech in a peaceful way."

Some businesses like the Mechanics Bank on Shattuck Avenue are not taking any chances, and boarding up windows ahead of the event.

"The hope for us tomorrow is that this rally is obviously very peaceful, it's contained to the park and cooler heads prevail," Lance Goree with the Downtown Berkeley Association said.

Much of the organizing for the event is being done on the internet.

Some #Berkeley businesses boarding up ahead of Saturday's expected dueling protests at #CivicPark. Similar event in March turned violent. pic.twitter.com/CrJRmft34D

"We're not punks. We're not scared of standing up for what we believe in, and we'll be darned if some random, ignorant close-minded misogynists are going to come in start tearing up the city," Berkeley resident Jason Jones said.

Police made 10 arrests and this week released photos of several others they believe may have been involved in violence during that similar set of protests in March.

"People who commit violent acts often do so under the cover of a peaceful crowd, so what we want people to do who are coming for peaceful protest is to separate themselves and not get provoked," Chakko said.