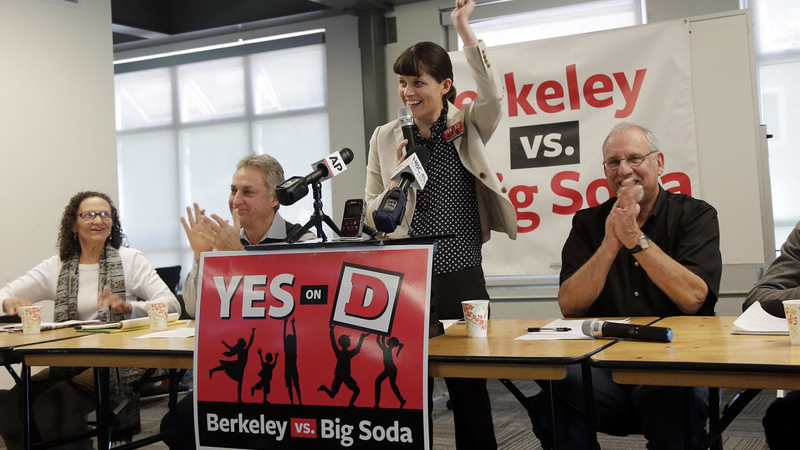 SAN FRANCISCO (KGO) -- The city of Berkeley has done what no other city ever has anywhere in the country -- pass a tax on sodas.

Voters approved Measure D with a whopping 75 percent of the vote.

Big soda is downplaying Berkeley's victory over the soda industry. So much so, that it's unlikely that they'll fight it out in court.

"We always look at other options but I don't think we're going to do that. The voters in Berkeley have spoken," said Roger Salazar with the No on D campaign.

But Berkeley officials think this could be the beginning of a big battle in the city.

"I don't think it's a concern, it's a reality. They are going to do it. They feel that if they can stop it here, either at the ballot box, which they couldn't or in the courts that will be a victory that will shut people down," explained Laurie Capitelli with the Berkeley City Council.

The No on D campaign people went on to say: "Soda tax activists have been venue shopping for more than five years. Berkeley was low-hanging fruit, and doesn't look like mainstream America."

Former New York City Mayor Michael Bloomberg contributed $370,000 towards the Yes on D campaign and on Wednesday announced he would support other communities who are thinking of fighting big soda.

"We're hoping that part of the message is that resources will be available to communities that want to take this battle on," said Bloomberg.

At least 30 other cities and states have failed to pass measures to tax sugary drinks. The soda industry spent more than $2 million on the No on D campaign in Berkeley and more than $9 million in defeating San Francisco's Measure E, also a soda tax ballot measure.

The industry believes other cities will not take Berkeley's lead.

"As per what you saw last night with the outcome of the national elections, it really doesn't seem like voters across the country have an appetite for more regulations and more taxation," said Salazar.

Meanwhile, the Berkeley soda tax could benefit nearby cities. All one has to do is walk or drive to other cities, such as Albany, to avoid having to pay, for example, an additional 68 cents for a 2-liter bottle of soda.