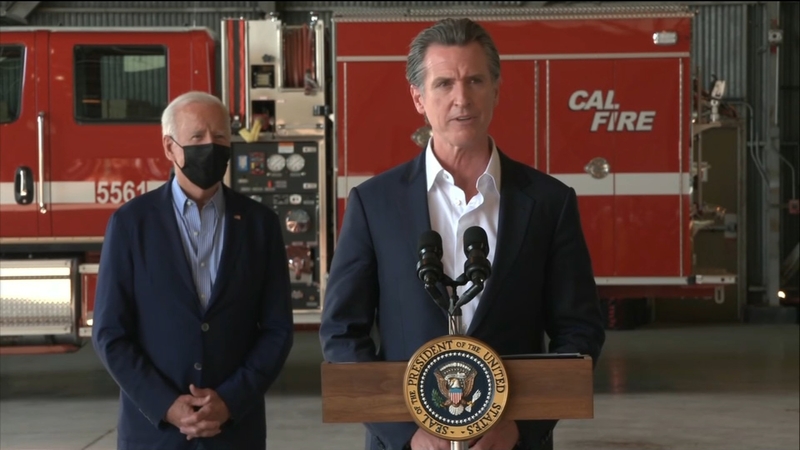 SACRAMENTO, Calif. -- President Joe Biden is providing last-minute help Monday to California Gov. Gavin Newsom, who is only the fourth governor in U.S. history and the second in California to face a recall election.

The only other time a recall election was held in California, in 2003, voters removed Democratic Gov. Gray Davis and replaced him with Republican Arnold Schwarzenegger. Voting ends Tuesday in the race that could oust Newsom, a first-term Democrat, and it's being watched ahead of the 2022 midterm elections, when control of Congress and more than half of governorships are in play.

RELATED: Here's how to cast your vote in upcoming election

"We can show the rest of the nation that we won't let Republicans drag our state backwards," Newsom tweeted. "Make sure your voice is heard. VOTE NO."

Amateur Republican political organizers upset with Newsom's approach to crime, homelessness and immigration launched the recall drive in early 2020, but the coronavirus pandemic got it to the ballot. Newsom was the first governor in the country to issue a statewide stay-at-home order that shuttered many businesses for months and kept kids out of classrooms.

"There's no front that I can think of where this man has done a good job - not on schools, not on homelessness, not in the way he shut down this state," Larry Elder, a conservative talk radio host and Republican front-runner in polls, said Monday at a campaign stop.

Elder planned events across Southern California, concluding with an election eve rally in Orange County that would occur as Newsom campaigns with Biden just to the north in Long Beach.

Tuesday is the last day to vote. Nearly 8 million Californians already have cast mail-in ballots. Republicans tend to be more skeptical of mail voting, particularly as former President Donald Trump has suggested it leads to fraud, so recall organizers are hoping Newsom's critics show up in huge numbers for in-person Election Day voting.

Voters are being asked two questions: Should Newsom be recalled, yes or no, and who should replace him? The results of the second question only matter if a majority wants to remove Newsom. Recent polls from the Public Policy Institute of California and others showed Newsom defeating the recall.

Lead recall organizer Orrin Heatlie said the fact that Newsom is bringing in Biden to campaign with him shows Democrats are concerned. He says neither Biden nor Trump should be weighing in on the contest because it's about California issues.

"This is a matter between the people of California and their governor and really has nothing to do with the federal government; and the president, with all due respect, should mind his own business," Heatlie said.

Meanwhile, he said Trump's statement Monday calling the election rigged was "more damaging than the actual fraud itself."

"When people aren't confident, if they don't have faith that their vote is going to count, then they're not going to waste their time to cast their ballot," Heatlie said.

There has been no confirmed evidence of widespread fraud.

Biden toured wildfire damage in Northern California before heading south to rally with Newsom. His appearance underscores the importance of Democrats holding the governorship in the nation's most populous state and chief laboratory for progressive policies.

"Gavin Newsom can bring in all the Washington folks that he wants, but this election is a referendum on the governor's failures," said former San Diego Mayor Kevin Faulconer, another Republican candidate to replace Newsom.

Businessman John Cox, a Republican who lost badly to Newsom in 2018, campaigned outside the French Laundry, the upscale Napa Valley restaurant where Newsom was caught attending a birthday party last fall in violation of his administration's coronavirus rules.

2:40 PM The president receives a briefing from local, state, and federal emergency response personnel on the impacts of recent California wildfires

3:25 PM The president surveys damage from the Caldor Fire by taking an aerial tour of hard hit communities in El Dorado County

4:25 PM The president delivers remarks at Sacramento Mather Airport on his administration's response to recent wildfires and investments he is proposing in the bipartisan infrastructure deal and Build Back Better agenda
4:55 PM The president departs Mather, California en route Long Beach

7:00 PM The president delivers remarks at a campaign rally with Governor Gavin Newsom