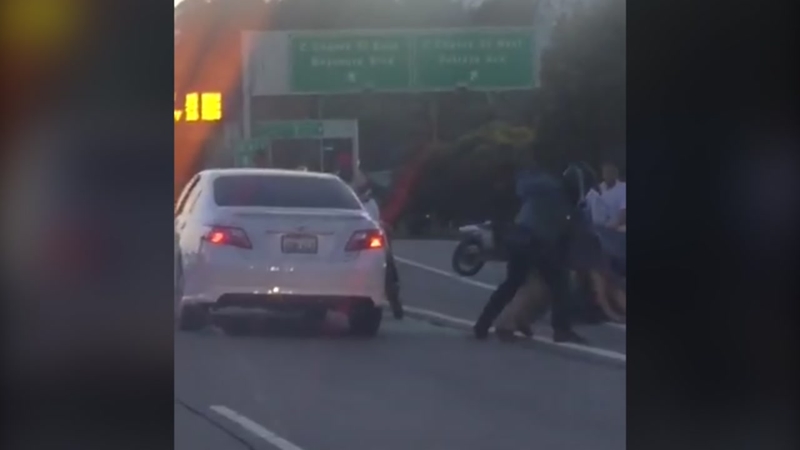 SAN FRANCISCO (KGO) -- A witness described the scene after a group of dirt bike riders allegedly punched and kicked a Lyft driver on a San Francisco freeway Wednesday in an incident that was caught on camera.

Cellphone video from Southbound Highway 101 begins with bikers popping wheelies before one collides with a white car. The other riders sped up after the collision, apparently to box in the driver of the white car.

A fight is seen between dirt bike riders and a motorist on a freeway in San Francisco on Wednesday March 8, 2017.

The person who filmed the event wanted to remain anonymous, but described the scene as the fight unfolded. "And then they approached the vehicle and they started punching in the panels on the vehicle and hitting the windows, breaking the windows. Another vehicle impeded my view so I couldn't see exactly if he was, the man was pulled from the vehicle or if he got out on his own," the witness told ABC7. "Four to five men were hitting him, kicking him even when he was down, very clearly they broke his leg."

The witness said he got out of his car to help when the bikers left the scene. "He had a broken leg as I said. He had a bloodied face. He had road rash. He was in pretty rough shape."


The CHP advises drivers not to get out of their vehicles in an incident like this one. The witness who filmed the fight says he hopes the suspects are found. "These guys obviously think they can do just whatever they want. These are the types of incidents that really need to get attention and that really need to get prosecuted."