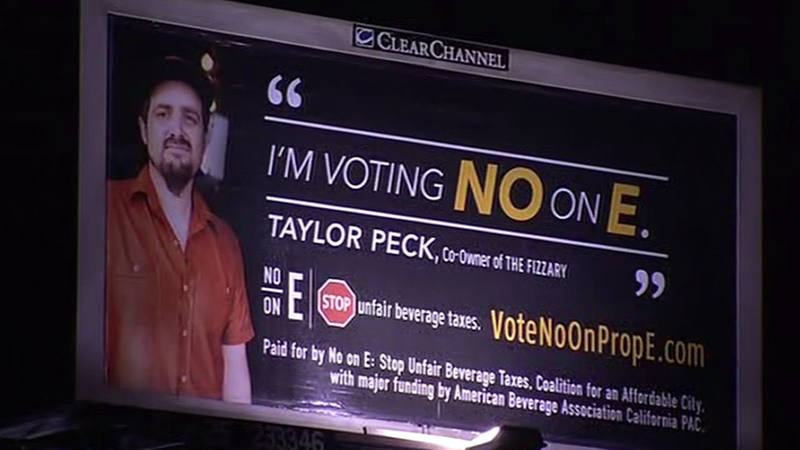 SAN FRANCISCO (KGO) -- The proposed soda tax on San Francisco's November ballot is designed to cut down on consumption of sugary drinks and tackle diabetes and obesity, but some local business owners say they're the ones who will take the biggest hit.

On Harrison Street there are new billboards that went up about this issue. The billboards are heavily funded by the American Beverage Association and are urging voters to reject the tax saying it will hurt business owners, but backers of the proposition say the message is misleading.

The billboards show the faces of local business owners and the message, "I'm voting no on E - stop unfair beverage taxes."

Taylor Peck is on several of the signs. He co-owns the Fizzary, a boutique soda and candy shop with two San Francisco locations.

"It will certainly affect us in a way that will result in diminished sales, and increased competition from out of city vendors," Peck says.

Proposition E charges distributors 2 cents per ounce of a sugary drink. The cost will likely be passed on to the merchant and again passed on to the consumer. So tax on a 12-ounce bottle of soda would be 24 cents more.

Health advocate Roberto Vargas has been trying for years to get a bill like this before voters to fight childhood obesity and diabetes.

"There are just as many business folks who think it will be a good thing, but we don't have the millions of dollars to pay to billboards up with their faces on them," Vargas said.

"These billboards are misleading because they're putting a lot of small business owners up to say this is going to burden small business. This is a tax to be paid by the distributor, not by the retailer," Weiner said.