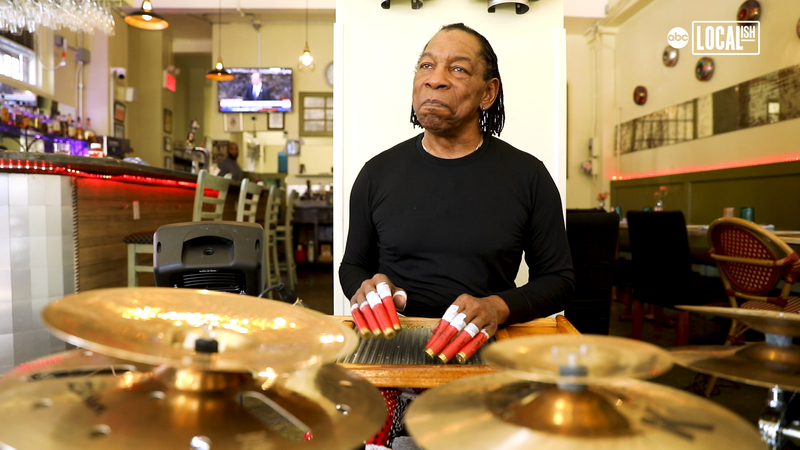 NEW YORK CITY -- This small cafe in the East Village is filled with sunlight, the smell of coffee, and the soothing tunes of a jazz trio. But this trio is different. There are a saxophone and a bass, but nobody on drums. Instead, they have a washboard. And a master washboard player.

"There's a word in our language that describes him exactly," says bassist Stanley Banks. "He's magic."

Newman Taylor Baker, a.k.a. Washboard XT, has a smile that lights up a room and deft hands that fill it with music. His fingers, covered with shotgun shells, glide across the corrugated metal and bang the wooden edges of his washboard, keeping tempo for the band.

"It's just a completely different sound," says saxophonist Joe Ford. "The washboard takes up a different space in the music than the drums."

Baker came across the washboard in 2009 when he was helping clean out the apartment of a friend, jazz singer Evelyn Blakey, who is the daughter of legendary jazz drummer Art Blakey.

"I saw the washboard and imagined she had washed not only her clothes but her father's clothes, too," Baker recalls. "I said I'm taking this because I just thought it had magic."

Maybe it did. It created a spark in Baker to research his family's past.

"The washboard took me to learn about my grandfather. He was born a slave in 1860."

After the Civil War ended, Baker's grandfather, Thomas Nelson Baker, became a sharecropper, then went to school. He became the first African American in U.S. history to earn a PhD. in philosophy, receiving it from Yale in 1903.

Baker says the instrument he has come to master makes him feel more tightly bound to his grandfather's history of hardship and perseverance.

"The washboard became an instrument through the hands of the enslaved people," he says. "The washboard went from being a tool to being an instrument. The drudgery of work became turned into the energy of pleasure and relief from that work."

He's also looking toward the future, ensuring the music he loves connects him with the next generation.

"There's a tradition in washboard players that you get the name Washboard Sam, Washboard Joe. I have a friend in New Orleans, Washboard Chaz," he says. "I thought of my grandson, Xander Taylor. So I decided I would do Washboard Xander Taylor; Washboard XT."