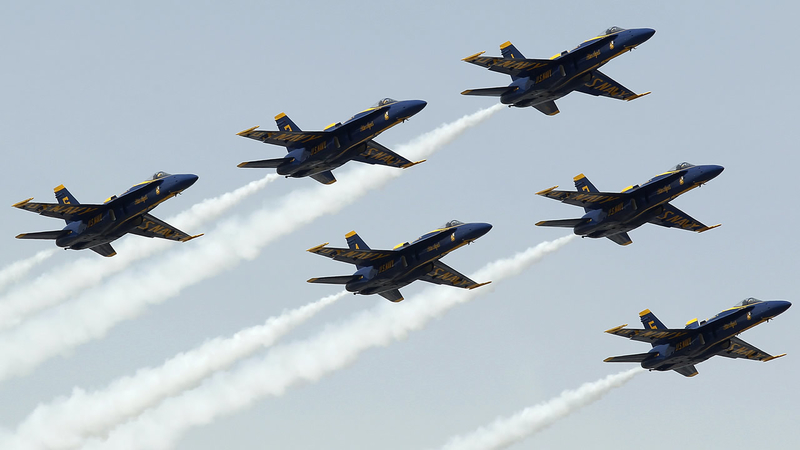 SAN FRANCISCO (KGO) -- It's a big week in San Francisco as Fleet Week roars into town. Training is a big part of the week, but there will also be some impressive shows over the city this week.

The most popular one of course is the Blue Angels. They arrived Sunday night to Oakland International Airport. They'll start practicing Thursday and Friday and will then perform at the Fleet Week Air show, Saturday and Sunday, October 10 and 11.

The first U.S. Navy ship of Fleet Week is tied up in San Francisco Monday.

The first US Navy ship, USS Somerset, arrived in San Francisco Monday. The ship will soon be joined by another half dozen ships from the US Navy and US Coast Guard, as well as the Blue Angels in this celebration of the military.

Crews were at a command post practicing an emergency drill on Monday. The drill may look easy, but the US Navy said it takes a high level of skill. "He took a 100,000 plus ton craft and parked it in a driveway and didn't leave scratches, didn't knock anything down, it was a huge success, very, very difficult," Rear Adm. Daniel Fillion said.

The scenario was what if San Francisco piers were damaged in an earthquake and a yacht club in the Bayview Hunters Point neighborhood was the only way crews could transport emergency vehicles to the city? "It's easy to say we're going to throw trucks on a boat and move it across the bay. Think about if you had to put that truck on a boat and you actually have the boat crew talking to the drivers of the trucks and you actually get the load masters to tie them down, you learn a lot every time," Department Director of Emergency Management Rob Dudgeon said.

In this case, they learned PG&E trucks are difficult to disembark and would require raising the ramp. "We know now so that would be last piece of gear we would take off of the vessel," Fillion said.

The idea is to take all the agencies in town for Fleet Week and have them practice different disaster drills. In this case, they practiced for a major earthquake. They realize most people associate the Blue Angels with Fleet Week, but they want people to know Fleet Week is about more than an air show. "For Fleet Week yeah there's a lot of noise from the airplanes and everything else, but remember there's more to it behind that and this is our opportunity to have all in town where we can get face-to-face practice with them and not just talk," Dudgeon said.

While the shows are fun for the public, the different agencies are also making sure to take advantage of being together. There will be six ships, one from Canada, who will all participate in the Parade of Ships.

Thousands are expected in the city for the special events, which also include the parade of ships and ship tours.

A news conference will take place on the Cape Hudson to help kick off the week.