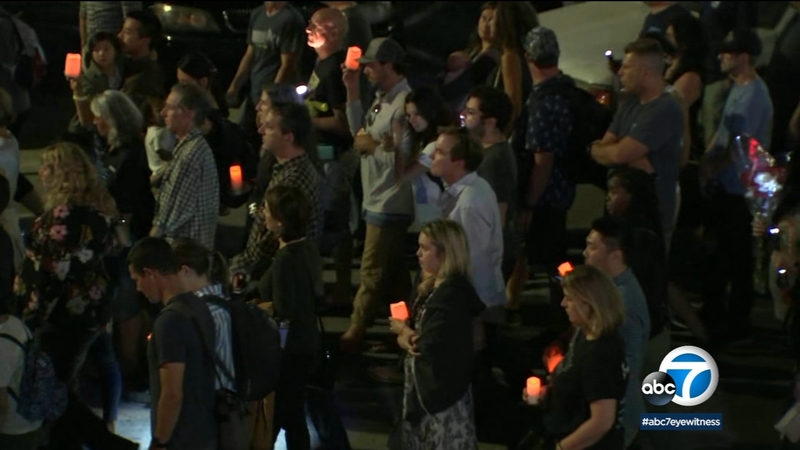 SANTA BARBARA, Calif. -- As teams of federal, state and local officials looked into exactly what made a deadly fire break out on a diving boat off the coast of Santa Barbara, many were stopping to remember the victims.

A candlelight vigil was held in Long Beach Thursday evening for the victims.

In the meantime, though, the agency expects to issue a preliminary report in just 10 days that will review the basic facts of the case, without drawing conclusions about the cause.

The wreckage of the boat is submerged in 60 to 65 feet of water and inverted. Investigators are taking photos and videos of the wreckage before an attempt is made to bring it back to the surface.

NTSB officials also met with families of the victims on Wednesday.

"The biggest thing I wanted to get across was how sorry we are for their loss," Homendy said. I can't imagine what those families are going through right now. It is heartbreaking. This was a horrific tragedy. It is clear that they are devastated and our hearts go out to them."

Authorities said Wednesday they recovered the bodies of 33 people who died in the intense fire on a boat off the coast of Santa Barbara while one person remains missing.

Authorities had previously said that 34 people, of the 39 people aboard the 75-foot Conception, were presumed dead after Monday's pre-dawn fire engulfed the boat named Conception as the victims slept below decks near the island of Santa Cruz during a three-day scuba diving excursion.

Newly released infrared video shows roaring flames and thick smoke billowing out of the boat. The U.S. Coast Guard released the footage of the massive blaze as first responders arrived to the scene. Video shows smoke shooting into the sky as the inferno intensifies. Authorities said the fire was difficult to knock down as it kept reigniting.

Investigators believe vital evidence may have gone down with the ship or drifted out to sea.

Authorities will want to produce a timeline of the ship's final voyage from the moment it pulled from a Santa Barbara dock early Saturday morning until dispatchers received the frantic mayday call of the captain overwhelmed by smoke about 20 yards off Santa Cruz Island around 3:15 a.m. Monday, experts said.

As the investigation into the tragedy expands on land and sea, federal and local authorities will be looking not only at determining what went wrong but also seeking lessons that could lead to changes in regulations for commercial vessels.

Of the 20 people who were recovered earlier in the week, 11 of the victims were females and nine were males, Santa Barbara County Sheriff Bill Brown said at a press conference Tuesday morning.

Most of the recovered victims, including those who suffered "extreme thermal damage," need to be identified by DNA analysis and officials are collecting samples from family members, Brown said.

After flames broke out, five of the six crew members were able to jump overboard and escape on a dingy. Those five crew members had been awake and on the bridge of the boat when the fire sparked.

They were pulled from the water after banging on Bob and Shirley Hansen's pleasure craft. The crew told the Hansens one of the crew members had a girlfriend on board the engulfed boat. One of the rescued individuals suffered a broken leg.

"It was horrific. I'd never seen such a thing," Bob Hansen said. "There wasn't a part that wasn't burning. Everything was burning on it."

The Conception sank in 64 feet of water as firefighters were battling the blaze, leaving the charter protruding from the water, officials said.

Santa Barbara County Sheriff Bill Brown said it may take some time to identify the deceased because of the condition of the bodies and because they don't have a full manifest of everyone who was on board.

A man who sprang into action after a diving charter become engulfed in flames near Santa Cruz Island described the deadly blaze as "horrific" with dozens of people apparently trapped below deck.

Family members looking for information about their loved ones are asked to call 833-688-5551. A family assistance center was established at Earl Warren Showgrounds, 3400 Calle Real, Santa Barbara. For information, call 805-696-1188.