Bay City News
HALF MOON BAY, Calif. -- The body of a man found floating in the water off Miramontes Point in Half Moon Bay on Sunday morning has been identified by the San Mateo County coroner's office as 18-year-old Hayward resident Naphtali Moi Moi, who went missing 10 days earlier while boogie boarding at Poplar Beach.

RELATED: Vigil held for star Hayward High School football player who went missing after falling off boogie board in Half Moon Bay

Moi Moi, a Hayward High School senior who planned to play football at the University of Wyoming, was with two friends at the beach around 3 p.m.
on April 18 when he fell off his boogie board.

The friends last saw him out in the water facedown and unresponsive, and emergency responders were not able to find him during a subsequent search, county sheriff's officials said.

RELATED: Search resumes for missing Hayward teen swept out to sea in Half Moon Bay after possible sighting

A body was then reported at about 11:20 a.m. Sunday near the Ritz-Carlton hotel. Coroner's officials used dental records to help identify it as that of Moi Moi.

The cause of death is pending further examination, according to the coroner's office.
Report a correction or typo
Related topics:
half moon baydrowningscholarshipwater rescuerescueathletesfootballvigilrip currenthigh school footballmissing teenagermemorialbody found
Copyright 2020 by Bay City News, Inc. Republication, re-transmission or reuse without the express written consent of Bay City News, Inc. Is prohibited.
RELATED 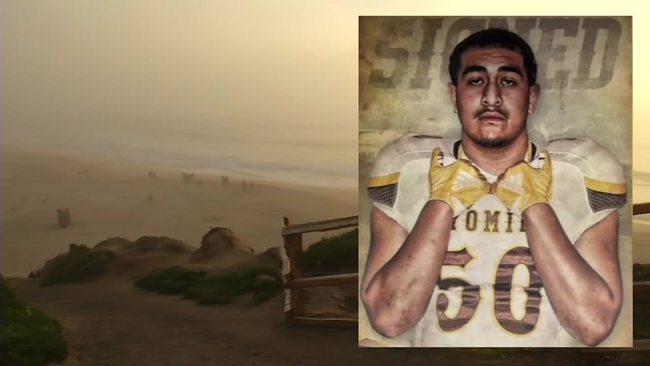