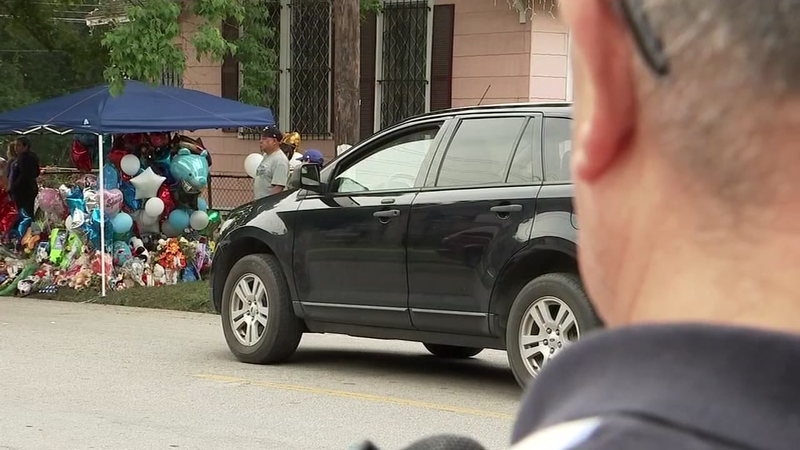 The horrifying situation happened Tuesday afternoon outside Richard Guerra's home. Now Guerra is speaking exclusively to our sister station abc13 about the stabbing.

Guerra said he was inside the kitchen eating when he heard a little boy cry out.

"Please take everything. Don't kill me." On #abc13 at 4PM, hear for the man who tried to save #JosueFlores. #hounews pic.twitter.com/KMPRcCizo0

"First. He goes 'Ah!' He screams and the first scream didn't catch my attention. The second one did. I hear him saying, 'Take everything please. Don't kill me please,'" said Guerra. "I came out the front door. I walked to the back. The black dude had him pinned down against the fence. When he seen me, he let him go. He ran off. I walked up to the kid. He talked to me like normal but he was scared. He told me, 'I'm alright. I want to go home. I want to go home.'"

You could hear it was difficult for Guerra to recall what happened next.

The man said the little boy tried to walk away but suddenly collapsed on the ground.

It was only then that Guerra realized the boy had been stabbed by the attacker. Guerra said he witnessed stab wounds to the boy's chest and arm.

Guerra explained he tried to stop traffic, hoping someone could help.

A man across the street called 911.

Guerra saw a cop pull into a nearby gas station and flagged him over to help. Guerra decided next to go after the killer.

"I seen him in the street running. I went after him with my van. I tried to run him over but he was fast enough that he got to Main Street. He crossed over the light rail tracks and ran along the side and went on to Winnie," said Guerra. "I sure did want to kill him. I seen what he did. That was a little kid. That's not right."

"It was to rob him. He didn't have nothing but his backpack," said Guerra. "I'm pretty sure he already wasted his lunch money. He was coming home from school."

Omar Garza lives just down the block. Just moments after the stabbing, Garza said Calhoun raced by his house.

"I was barely warming up the charcoal. That's when this guy. He runs by. He looks at me. He keeps looking back. He's just running. He's nervous," said Garza. "He's just a little boy. I had to help out. No one seen him. It was all on me."