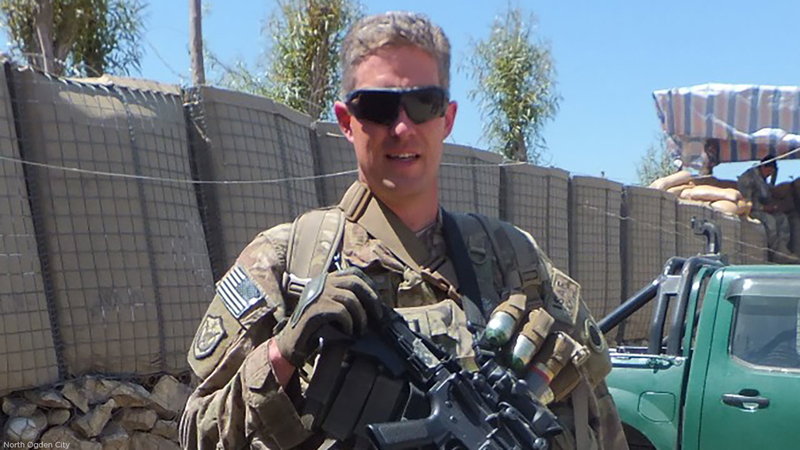 NORTH OGDEN, Utah -- Just days before he was killed while serving in Afghanistan, the mayor of a small Utah town took to Facebook with an emotional plea urging his fellow Americans to vote in the upcoming midterm elections.

Maj. Brent Taylor, the mayor of North Ogden, died Nov. 3 following an apparent insider attack that also left another servicemember wounded, according to the Department of Defense.

In an Oct. 28 Facebook post, 39-year-old Taylor sounded off on the recent parliamentary election in Afghanistan, the country's first in eight years. He said the turnout of four million voters who braved "threats and deadly attacks" was a "success for the long-suffering people of Afghanistan and for the cause of human freedom."

Taylor continued: "As the USA gets ready to vote in our own election next week, I hope everyone back home exercises their precious right to vote. And that whether the Republicans or the Democrats win, that we all remember that we have far more as Americans that unites us than divides us."

He accompanied his post with photos of Afghans waiting in line to vote and later casting their ballots. He also shared a photo of a friend, Lieutenant Kefayatullah, who he said had been killed the day before voting began.

Taylor was elected mayor of the town of 17,000 people in 2013 after serving on the city council for several years. He announced his deployment in January 2018, telling constituents in a Facebook video that he had expected to be deployed with the Army National Guard for 12 months.

"There are three great loyalties that have guided my life and everything in it: God, family and country," Taylor said. "While I am far from perfect in any of these respects, I have given my life to serve all three of these loyalties whenever and however I can, and right now there is a need for my experiences and skills to serve in our nation's long-lasting war in Afghanistan."

He said he was assigned to serve on an advisory team to train the staff of an Afghan commando battalion.

According to his official biography, Taylor served in the United States Army National Guard for 12 years, completing two tours of duty in Iraq and one in Afghanistan. He had also worked for the Defense Intelligence Agency, the National Ground Intelligence Center and the Department of Homeland Security.

"Brent had a profound influence on this community. He was the best of men with the ability to see potential and possibility in everything around him. We feel blessed to have had him as our mayor," North Ogden City said in a statement.

NATO said in a statement that Taylor's alleged killer, a member of the Afghan National Defense, was immediately shot and killed by other members of the Afghan Forces.